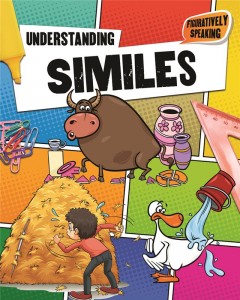 This series is visually appealing, combining recent images and colorful fact boxes. Each volume begins with a foundation of the topic and is then crafted into four sections entitled, Figure it Out!, Talking About It!, Write About It!, and Now It’s Your Turn!. The books also support a five step writing process with clear examples. In the book Understanding Sayings, one topic is the saying from Aesop’s Fables “The Crow and the Pitcher.” The sayings include “eat crow”, “little by little does the trick”, and “necessity is the mother of invention”. This allows for discussion with students to define prior to reading and then after reading the fable. In the book Understanding Metaphors, there is a section called Understanding Metaphors in Poetry. An excerpt from “The Highwayman” by Alfred Noyes is included. This exposes students to different vocabulary words. Thoughts: I chose to use Understanding Sayings and Understanding Metaphors  to supplement lessons for sixth grade. Because the books are highly visual with colorful photographs, the book was shared to the class using the document camera. While this series provides examples for teachers to use with instruction, students may not necessarily select this book for independent reading prior to being introduced to the series. 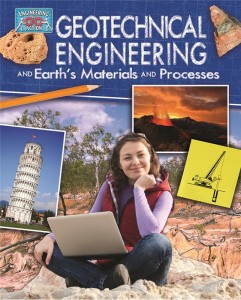 The page layout is reminiscent of a scrapbook including colorful or historical pictures, and notes that appear clipped or pinned to the page. Agricultural Engineering includes topics such as photosynthesis and feature biographies including Jethro Tull. Human body system charts and ways to improve design are found in the Biomedical Engineering. Materials Engineering explains the Periodical Table and prototypes. Geotechnical Engineering includes a lively diagram of the rock cycle and architectural marvels such as the Leaning Tower of Pisa and the Channel Tunnel.  Each book contains a challenge to test out the career field followed by additional books and online information, a glossary and index. The titles listed above are the most current publications in the large series. THOUGHTS: This series allows students to explore areas of science that interest them while providing several activities for students to see if the career might be just right for them.  Make guidance counselors aware of the series to enhance their lessons or so they can share with students aspiring to enter STEM fields. 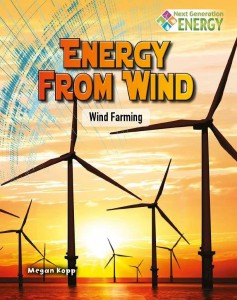 A wide range of topics including the  history of climate change, solar design, the role of geysers, renewable biomass, wind power issues, ecological footprint, composting, carbon offsets, nuclear fuel, use of fossil fuels, tidal power, and the basics of fracking is covered in this middle level series. Fact boxes have rewind and fast forward features and you choose features that push the reader to analyze beyond their situation. Activities allow students to put the content into  experiments. The books are presented in an organized layout with terms in bold font, topics in larger fonts, and captions to add to illustrations. Each book contains a glossary and a listing of books and websites to consult for the topics. THOUGHTS: Inspire additional reading for students and to correlate with standards in STEM research projects with this series. The experiments could be used in a class demonstration or as an interactive book talk with a class.