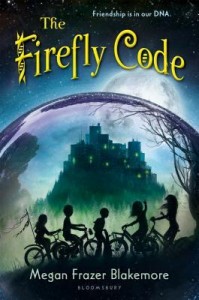 Megan Frazer Blakemore author of The Water Castle (2013)  has written another timeless modern twist of science fiction and fantasy found throughout her latest novel The Firefly Code. The setting is a utopian community named Old Harmonie. Turning 13 years old is a significant day where those learn if their DNA is natural or designed. For example, parents can opt to dampen undesirable traits found in their children. The other special event on their 13th birthday is that they reveal their latency or skill. Mori’s great-grandmother was an important scientist with the founding of the community, and Mori’s friend Theo finds inspiration there.The five main characters are about to learn truths they did not imagine. How will they handle reality?THOUGHTS: The book makes readers think about self-modifications. What makes it okay to modify not more than 30 percent of the DNA? This is a book to suggest to readers that adore science fiction work of Lois Lowry or S.A. Bodeen that feature a dystopian society. 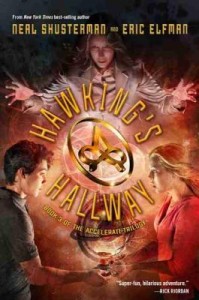 Magical items are with Edison. Mitch’s father helped the Accelerati steal hundreds of millions of dollars which was one cent from every bank account. This action of his father deeply troubles Mitch. On top of this, the time left to save the world is fourteen days. Nick’s father and brother have a mind wash to forget about him. Is there any way that they can recall what really took place?  At this point the characters get to see both the good and bad parties in action. THOUGHTS: This book is necessary for your libraries so that students can continue with this engaging series. The book is creative and can spark readers to learn more about inventors and inventions and they just might make their own! 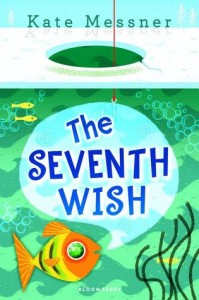 Charlie is a passionate about Irish dancing, but misses her older sister Abby, who is away at college. Charlie is encouraged to ice fish with hopes to win a contest so she could use the prize of money towards her feis in Montreal. While fishing not too far out on the ice, Charlie hears the small fish that she catches ask her to have a wish if she will release the fish. At first she wishes not to have a fear of ice and for a certain boy to like her. When her mother applies for a full time nursing positing, Charlie goes out to find the fish and make another wish. Her mother complains about having to send more money to Abby for her textbooks. Her third and fourth wishes are for her friends. One is that Dana will do well with her language test, and the other is that Drew finds success during basketball tryouts. Once again Charlie is off to find the wish granting fish with emerald eyes. Her family is rocked when they receive a call that Abby is ill due to heroin. With her mom’s nursing background it makes her daughter’s decisions harder to handle. While at the treatment center, Charlie sees fellow dancer Leah there visiting her mother. The next wish is that Abby gets better and has the insurance cover the treatment. Her sister drives Charlie to the dance competition and is appalled to learn that Abby took her remaining money and has not returned. Abby has overdosed and is now at the Albany Medical center. At this point Charlie is done wishing. THOUGHTS: Messner’s All the Answers was one of the titles that I reviewed last year for PSLA and found students gravitate towards that book. Unfortunately, the statistics show that the use of heroin for young people is increasing. While not the only focus of the book, the element allows a window for discussion of this important topic.