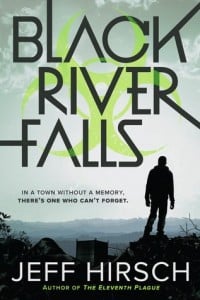 The residents of Black River, New York, have been hit with a virus (specifically, Lassiter’s Viral Retrograde Amnesia), which leaves them physically healthy but robbed of their past memories of family, occupation, and self.  Seventeen-year-old Cardinal Cassidy is writing this book as a letter to his older brother in college to explain the drastic changes in their town and family (both parents were infected).  As an uninfected person, Cardinal is now best friends with his former bully, Greer, and in a mountain camp in the quarantined city they try to protect younger infected children from falling victim to the increasingly lawless city.  Piecing together their pasts or their futures would be helpful too.  A green-haired girl they call Hannah joins them, and they deduce that she came to Black River to be infected and forget…but what?  As time goes on, the government wants to erase the existence of the disease and the city, and Cardinal and his friends are caught in the crossfire.   THOUGHTS: This is an odd book to categorize.  The setup is appealing and seems to promise either action or thoughtful introspection about memory and identity.  Instead, the intriguing premise falls flat; the book lacks both action and depth of insight.  While Hirsch does offer some action, it’s not until the final chapters. He does attempt thought on character choices (seeing how happy she is, Cardinal chooses not to reveal his mom’s sometimes happy, sometimes painful past to her; when immune Cardinal has a chance to be infected and thus forget his own awful memories, he chooses to keep his life as it is).  Ultimately, a quote from Cardinal himself sums up the book: “I…got moving without any real destination in mind” (301).  The book is refreshingly free from explicit relationships or language, and the action, while deadly, is handled with care.  Recommended for collections where stand-alone dystopian fiction is in high demand. 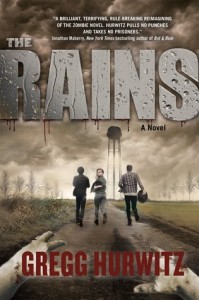 Something is terribly wrong in the isolated community of Creek’s Cause, home to 16-year old Chance Rain and his older brother, Patrick. A recent meteor shower has unleashed a “Dusting” of malignant spores that infected everyone over age eighteen. With eyeholes bored straight through their skulls, the Hosts waste no time in capturing, caging, and transporting the town’s children to parts unknown. Some of the kids seek shelter at the high school and try to organize a resistance. But with Patrick’s eighteenth birthday just a week away, the Rains and Patrick’s girlfriend, Alex, decide to go in search of help. On the way, they discover that what’s happening in Creek’s Cause is only a prelude to infection on a much greater scale. Incorporating elements of classic zombie and alien invasion stories, The Rains gets off to a gruesome start and a quick pace that Hurwitz maintains throughout. The brothers’ race against time adds extra suspense to this YA horror series-starter. THOUGHTS: It’s the best of all the recent zombie novels, and it’s recommended for fans of Jonathan Maberry’s Rot & Ruin series. Hopefully the sequel isn’t far behind!