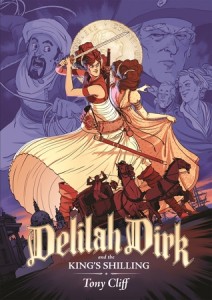 In this sequel to Delilah Dirk and the Turkish Lieutenant (2013), Cliff continues the rapid-pace action, character insights and talented artwork.  Delilah and her partner Selim continue their exploits in exotic locales, but Selim’s cautionary words can’t stop Delilah from striking back at a British soldier who has wounded her pride.  The soldier, in turn, lets Delilah take the blame for his own unsavory activities.  Thus Delilah and Selim return to Britain to clear Delilah’s name.  And, though she grew up there as Alexandra Nichols, she is as uncomfortable in society as Selim and finds it difficult to keep her alter ego hidden from her mother.  There is much to enjoy in characters and artwork, and Cliff leaves the ending open for further adventures.  THOUGHTS: This is a lively story with excellent art connections, interesting to any fan of art or graphic novels.  Cliff acknowledges his at times inaccurate portrayals of early 19th century London, making this more a story for adventure-seekers than history buffs.  Even readers who pick this up casually will likely enter into Delilah and Selim’s story. 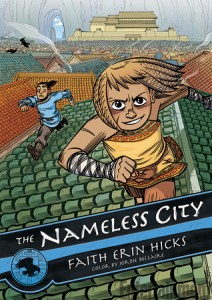 Erzi wants the boys to defend the city and be ready for war. Kaidu’s father asks about his mom and is shocked to learn that grandfather died six years ago, and mother is the tribe leader. His estranged father gives him a gift of a knife. Rat doesn’t initially like Kai and certainly doesn’t want him to run faster than she can. On the third day in the city Kaidu asks her to teach him to run, and he will bring food in exchange. It takes 27 hard days of training to get close to him. Kai loves all of the books the monks have, but Rat doesn’t know how to read. She shares that she is not lucky and her parents are dead. Eventually she asks for boots, but wearing boots belonging to another class could lead to major disputes. Rat overhears an assassination plan and risks it all to share this with Kai. Will the assassination be thwarted? THOUGHTS: Be sure to add this fast paced and heartfelt graphic novel to your collection and share with your students.  Students will be impressed with the first book to start the series.