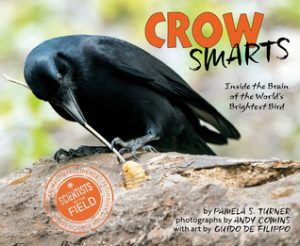 Turner, Pamela S. Crow Smarts: Inside the Brain of the World’s Smartest Bird. New York: Houghton Mifflin, 2016. 978-0544-416192  $18.99.  73 pp. Gr. 5-9.
The latest in more than two dozen popular titles in the Scientists in the Field series, Crow Smarts follows crow scientist Gavin Hunt as he tracks and tests the crows of New Caledonia.  We meet several crows with individual personalities (Little Feather, Munin, Lefty, and even “The Crow We Never Got Around to Naming”), and we also meet a writer and researchers with a shared sense of humor.  One crow, “looks at me as though she’s attempting a Jedi mind trick.”  Combined with inviting and colorful page spreads, and beautiful photographs, this book draws readers into the story.    Author Turner has cared for baby crows until they’re ready to be released.  She observes of crows, “[Baby crows] are obsessively interested in everything. No newspaper goes unripped. No food goes unplayed with.  If one crow has something, the other crow wants it.  They are awesomely naughty” (65).  Turner believes more people should recognize the crows’ ability to use tools and to make tools, even specialized hooked tools.  This discovery has led to a re-definition of “human” (scientist Louis Leakey famously wrote that toolmaking was the “step which lifted ‘near-man’ from the purely animal level to that of human status” (8)).  Of the 1,371,500 known animal species, only five are known to make multiple kinds of tools (humans, chimps, orangutans, capuchin monkeys, and New Caledonian crows) and of those five, only two (humans and New Caledonian crows) are known to make hooked tools (39).  Turner’s writing is the perfect complement to the beautiful photographs that make the scientists’ work more clear.  THOUGHTS: Suitable for readers in grades 4-9, the entire Scientists in the Field series is excellent for promoting careers in science and an understanding of the wide variety of scientific work that is being done in the world.  Turner has a second title in the series, titled The Dolphins of Shark Bay.
598 Birds      Melissa Scott, Shenango High School 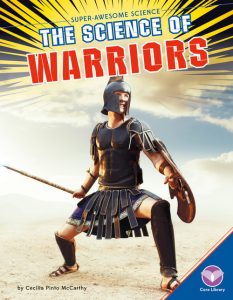 Hand this book to your students who can’t get enough books about weapons, battles, and the military. The Science of Warriors breaks down the history of weapons, protective devices, and vehicles to show how changing science has improved these areas within a warrior’s realm. Each section details early efforts by warriors through current practice, such as the use of armor made with animal skins to mail and plate armor through modern-day use of Kevlar, all influenced by science.  The text is interesting, factual but easy to read, and provides many sidebars with further information. There are also great photographs to enhance the text. The book contains a Table of Contents, glossary, index, and sections of Fast Facts and Stop and Think questions. THOUGHTS: This book is an interesting mix of history, science, and warfare. It will fly off the shelves.