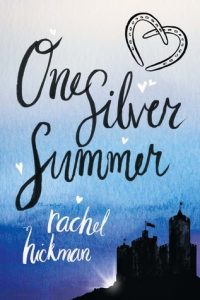 Sass’s world has fallen apart due to the recent death of her mother. She has moved from New York to England to live with an uncle she hardly knows. As a way to escape her overwhelming grief, Sass explores the countryside around the small seaside town that is her new home. It it on one of these jaunts that she stumbles across a silver horse in a pasture and Alex, who she assumes to be a stable boy. Drawn to the horse, Sass begins to take riding lessons with Alex. Over time, they form a friendship and then a romantic connection. But Sass is not the only one looking to escape problems by riding. Alex has fled the city to the rural home of his grandmother after the breakup of his parents’ marriage and the resulting publicity. But he can’t outrun publicity forever because Alex is really Alexander, son of the Prince and Princess of Wales and heir to the throne. When Sass realizes the truth and the media descend, the two teens must decide if their relationship can endure the spotlight. THOUGHTS: One Silver Summer is a gentle, romantic read with some fairy-tale like components.  Readers willing to suspend their disbelief about certain plot points (for instance, Sass not immediately recognizing the heir to the British throne in a book set in the present day, media saturated age), will find a sweet story about making connections and falling in love. 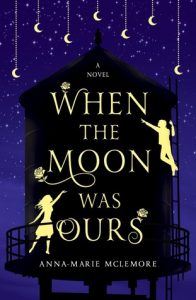 An intriguing romantic fantasy that follows the bond between two outsiders in a small town;  Sam a transgendered boy of  Pakistani heritage whose true past is unknown and Miel, a Latina girl who magically appears in the water spilled from the tipped over water tower.  Magical realism pervades the whole story.  Sam  paints moons that illuminate spaces and stop the fears of the school children, and Miel grows roses out of her wrists which are rumored to have romantic powers.   The two develop a genuine, caring, and protective relationship, starting as friends and growing into something much more.  The antagonists in the story are the enigmatic Bonner sisters, who have the  ability to make all the boys in town fall in love with them. This ability is lost when the eldest sister must leave town because of a secret pregnancy. When Chloe returns, the sisters hone in on Miel and her roses to recapture their power. This novel explores the themes of love, loyalty and self acceptance.  A big positive in this novel is the portrayal of diversity. Families in all forms are present, the novel reveals beautiful elements of Latina and Pakistani cultures and  the transgendered Sam, is a wonderful character whose gender is matter of fact, just another one of many intriguing character traits. Though the descriptive language is beautiful, much of the story is too ambiguous for my understanding, leaving me confused and unsatisfied at points. I found that it strained my ability to suspend disbelief. THOUGHTS: This title could be a hard sell for many teens, but for those who enjoyed McLemore’s Weight of Feathers or who have a strong preference for magical realism this tale would make a good choice. 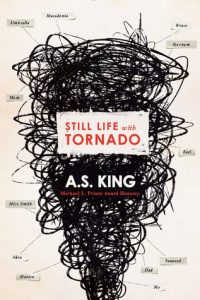 Sarah is having an existential crisis. Her older brother has been in exile from the family for six years, there’s been a major rift between Sarah and her friends and classmates, and she’s been truant from school for weeks. When her artwork is sabotaged before an exhibition, Sarah stops attending school and spends her days wandering around the streets of Philadelphia. Sarah’s living in angst and denial about her family, her friends, and her art, but three of her former and future selves are helping her put the pieces together. Ten year-old Sarah is the catalyst for 16 year-old Sarah to remember the emotional and physical abuse that tore her family apart, and her 23 year-old and 40 year-old selves are there as proof that things can work out. Accept the strange detours in this novel, as Sarah figures out her complicated family and school life and enjoy this original work.  Many of King’s novels have a decided surrealistic bend, but at the heart of all of her books is the very real anguish and search for validation of her teenage characters. THOUGHTS:  A thought provoking book that looks at the effects of domestic violence without portraying the actual abuse. The intermittent chapters narrated by Sarah mother, provide a glimpse into the rationalization of the victim who hopes for the best.