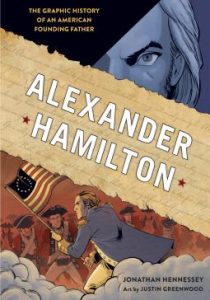 Alexander Hamilton: founding father, familiar face on the $10 bill, subject of a musical you might have heard of, and now the star of his own graphic history! The biography opens with Hamilton’s childhood in the West Indies, where he grew up the “bastard brat of a Scotch pedlar.” Essentially orphaned, Hamilton departed for America after St. Croix’s prominent citizens raised money to fund his education. He went on to serve alongside George Washington in the Revolutionary War before becoming the first Secretary of the Treasury (and full-time thorn in the side of Thomas Jefferson). He also repeatedly crossed paths with rival Aaron Burr, who challenged his rival to the duel that ended Hamilton’s life. Alexander Hamilton casts a wide historical net, covering plenty of background information on the Revolutionary War, the creation of the Constitution, and more. Jonathan Hennessey’s exposition-heavy style of narration may deter readers hoping for a Hamilton highlight reel. This is, instead, a rigorously-researched factual biography, and the text’s challenges occasionally outweigh its rewards. On the other hand, Justin Greenwood’s vibrant, energetic artwork will hold the reader’s interest on every page.  THOUGHTS: Alexander Hamilton is an engaging tour through the life and times of one of the Revolutionary Era’s most well-known but somehow unknowable figures, a man who “straddles history and myth.”