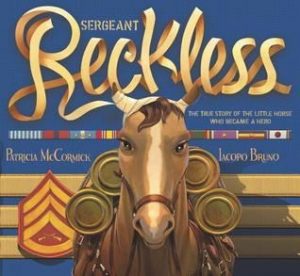 One of my favorite new titles from 2017, Patricia McCormick’s Sergeant Reckless: The True Story of the Little Horse Who Became a Hero is amazing in every sense. McCormick tells the fascinating story of a hungry little mare abandoned during the Korean War who was adopted by a group of Marines and taught to haul heavy ammunition. Named Reckless by the men, the horse had a very healthy appetite and worked hard for any and all food…and ate quite a few things besides! She especially loved ice-cold Coca-Cola. The little mare proved to be quite brave and steady in the face of danger. She earned a promotion from Private to Sergeant for her work within the Marines, and she is the only animal to officially hold military rank. She also received two Purple Hearts and retired with full military honors after the men she fought with started a campaign to bring her to the United States for her retirement. McCormick’s writing is well-paced and full of action, making this story a sure favorite for all lovers of horses and military history, but it would also make an excellent general read-aloud for all students. Equal to (or perhaps even topping!) McCormick’s writing are Iacopo Bruno’s marvelous, thoughtful illustrations. Every inch of the book is marked by Bruno’s work, from the detailed, informational front and back endpapers to the excellent back matter which includes McCormick’s Author’s Note and a photograph of Reckless at her ceremony of honor. Bruno illustrated the story in a scrapbook style which includes bits of newspaper articles and headlines, a snippet of the army field manual, layers of papers and photographs, advertisements, and more, and often McCormick’s writing is displayed on signs, sheets, playing cards, and other elements of Bruno’s illustrations. The book design is ingenious and makes the book even better. THOUGHTS: McCormick and Bruno are a winning team–students will love Reckless and her story.