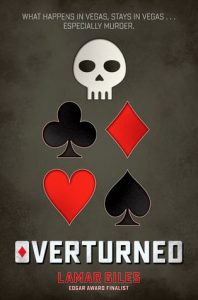 Nikki Tate understands Las Vegas.  Taught by Nathan “The Broker” Tate to play cards and growing up in the casino owned by her family, Nikki understands that the easiest way out is to win.  When her father is murdered a week after his release from death row, Nikki is determined to finish what he started and figure out who murdered her father.  Using the photographs taken and notes made by her father, Nikki quickly learns that perhaps she doesn’t truly understand Las Vegas or at least her father’s Vegas.  As she learns more about the underbelly surrounding the glitz of Vegas and the Poseidon group, Nikki must lie, scheme, and risk her life (and her friendships) to uncover the truth about her father, the Poseidon group, and the true Vegas.  THOUGHTS:  This is a fabulous mystery that keeps readers rooting for Nikki while also questioning her choices.  Perhaps Las Vegas isn’t as legit as some think.