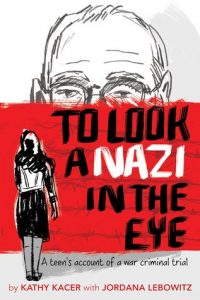 “‘Everyone cries here. There is no shame in that. If you’re not moved by this experience, you won’t be influenced by it,’ the guide said….” (6). Being the granddaughter of Holocaust survivors, Jordana Lebowitz has been interested in history and her heritage for a long time. Her special connection to other survivors expands while on March of the Living, a high school trip with the Jewish Day School Jordana attended.  After the trip Jordana maintains contact with Hedy Bohm who survived Auschwitz but lost both of her parents there. Years after their initial meeting, Jordana learns Hedy is part of a group of Canadian survivors that are traveling to Germany to testify against Oskar Groening. Moved to be a witness of history and represent her generation, Jordana contacts Thomas Walther, the man responsible for organizing the survivors to attend the trial. With determination and persistence, Jordana is afforded the opportunity to attend Groening’s trial. This book is a compilation of Jordana’s experiences, photographs, trial testimonies, and blog entries.  THOUGHTS: Jordana’s determination to witness history is inspiring. With aging Holocaust survivors, To Look a Nazi in the Eye encourages teens to know history and make a difference in their worlds. Readers looking for a contemporary connection to the Holocaust will get one in this book. With varied sources, there is much room for discussion. Because of the nature of the trial, this book is most suited for high school students studying or interested in learning more about the Holocaust.