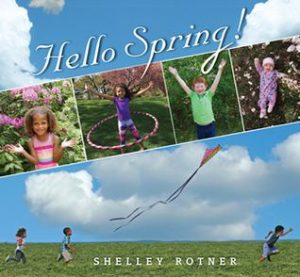 This book welcomes the arrival of spring with plenty of photographs on every page spread. The story progresses through early spring’s melting snow, to late spring’s arrival of dogwood blossoms, and all the way to the first day of summer and garden vegetables sprouting. Certain words are in a larger type size throughout the book (mostly verbs, but not always) and there is a small glossary on the last page. THOUGHTS: This picture book would be a nice addition to your library. It is similar to other season picture books you probably already have, but the children in the photographs in this book are diverse. 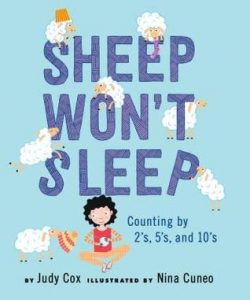 No matter what she tries, Clarissa can’t sleep. Why not try the old standby, counting sheep? She counts 10 sheep and before she knows it they are hanging out in her bedroom! “Try pairs of alpacas,” advise the sheep, so Clarissa counts colorful pairs of alpacas in twos. When this still doesn’t work, she tries patterned llamas in fives and groups of yaks in tens who wear “…woolly coats of many colors…like a wardrobe of winter sweaters.” With a cast of characters crowding her room, Clarissa uses basic addition and subtraction skills to “unwind” for a night of sleep (she unravels the animals into a giant ball of colorful, patterned yard). What to do with a giant ball of colorful yarn? Why get out knitting needles of course! The last pages show Clarissa peacefully sleeping under a new brightly patterned quilt. Cox’s story and illustrator Nina Cuneo’s pen and digital ink illustrations create a fun, brightly colored math-themed bedtime read. THOUGHTS: Highly versatile–use in math class, at bedtime, or with any group of animal lovers. 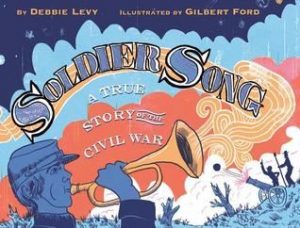 The Battle of Fredericksburg involved the largest number of soldiers of any battle during the Civil War. It was also a low point for the Union Army since more than 12,000 young men were wounded or killed with another 5,300 being wounded or killed on the Confederate side. After the battle, the soldiers camped on either side of the Rappahannock River to wait out the winter months neither side wanting to give up land. Due to the geography of the area, sounds carried very well from one side of the river to the other, especially the music that both sides used as both a time telling device (like, Reveille and dinnertime) and for entertainment. The divided armies could hear each other songs and would taunt each other by volleying back and forth between different patriotic songs. One day someone started playing the song, “Home, Sweet Home” and both sides joined in. That song and its message of home so touched the young men that they cheered for over half-an-hour. One soldier said in a letter sent home that if the river didn’t separate the two armies they would have come together after that song and settled the war right then. This story includes primary source Civil War letter snippets and song lyrics, in addition to the further information in the back of the book about The Battle of Fredericksburg and the history of the song, “Home, Sweet Home.” THOUGHTS: I loved this book. Not only did I learn facts about the Battle at Fredericksburg, but I walked away feeling hopeful about people. This book is great not just as a positive message about coming together even though we have differing opinions, but also the power of music to bridge the gaps between us. This is a great addition to any library or music teacher’s classroom library. The book includes web links to listen to the songs mentioned in the book. 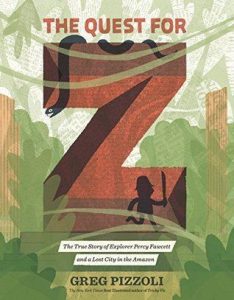 Another nonfiction winner from the author/illustrator who brought us Tricky Vic: The Impossibly True Story of the Man Who Sold the Eiffel Tower. Greg Pizzoli amazes readers with the life of Percy Fawcett, daring Amazonian explorer and man of mystery. Fawcett was born into a British family of adventurers and took on his own explorations after a military career and training with the Royal Geographical Society in London. He explored in Bolivia, Brazil, and Peru, charting then-unmapped territories and defining borders of r these nations. His South American travels met with many dangers, from aggressive anacondas to equally aggressive native groups, but Fawcett’s quick thinking and bravery usually won out and he completed several missions while making native allies along the way. It was from these people that he first heard of a legendary ancient city in the Amazon; Fawcett referred to the city as “Z” and imagined “…a paradise of grand temples and palaces carved from stone, hidden from modern man deep within the jungle.” In April 1925, Fawcett set off to find Z with only his son Jack, aged 21, Jack’s best friend Raleigh Rimell, basic provisions, a few local guides, and the financial support of several newspapers to whom he sold his story which was carried in snippets by local runners. Fawcett and his party were never seen again. Since Fawcett’s fateful trip in 1925, over 100 people have set off on quests to find Fawcett, or perhaps even Z. None have discovered his fate and some have even disappeared themselves. Pizzoli used a variety of sources including newspaper articles from 1925 and several books that have been written about Fawcett. It’s worth noting that one of Pizzoli’s sources, David Grann’s 2005 “New Yorker” article, is fascinating and would make excellent continued reading for mature readers. Pizzoli’s unusual and enjoyable illustrations provide some comic relief throughout the text. Back matter includes an Author’s Note, information on other Fawcett hunters, a glossary, and selected sources. THOUGHTS: So much more than just a biography, this book will be enjoyed by any reader who likes a little adventure.