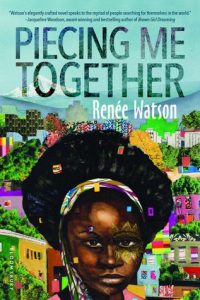 Jade, an African American teenager, has spent her high school career torn between two worlds. She lives with her mother and uncle in a poor neighborhood in Portland, where she has many close friends she has known since childhood.  However, she rides the bus across town every weekday to attend a prestigious private high school on a scholarship. When the guidance counselor offers her the opportunity to participate in a “Woman to Woman” mentoring program, Jade jumps at the opportunity to attend outings and establish connections with other successful black women.  She soon finds, however, that her mentor treats Jade as though she is a charity case rather than teaching her anything relevant and useful. If she hopes to get anything out of the mentoring program, Jade must learn to speak up and advocate for herself. The power of friendship and art (which Jade uses as an outlet to express her feelings) shine through in this thought-provoking novel about race, privilege, and finding one’s voice. THOUGHTS: Race, gender, class, privilege, and police brutality all seem to be common themes in young adult literature this year.  This title, a 2018 Newbery Honor book and Coretta Scott King Author Award winner, includes all of these themes and is not to be overlooked.  Not only would the book spark insightful discussions about these relevant issues, but it would also stir readers to fight for the change they wish to see in the world.  Short chapters and a lovable protagonist who readers will want to see succeed make this a quick and inspiring read. 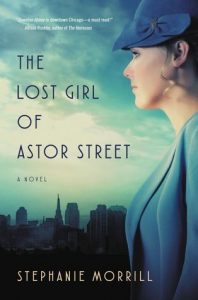 Morrill, Stephanie. The Lost Girl of Astor Street. Blink, 2017. 978-0-310-75838-9. $17.99. 349p. Gr. 7-12.
Eighteen year old Piper Sail is living a life of privilege in 1920s Chicago, her life seemingly unaffected by the criminal element (mobsters, speakeasies, etc.) present in the city. Her biggest problem is being considered a bit of a rebel and a non-conformist by those around her. All that changes one spring day when Lydia, Piper’s best friend and next-door neighbor, disappears one day when walking home. Piper is convinced that Lydia did not leave willingly; she didn’t leave a letter or say goodbye. Dissatisfied with the investigation into Lydia’s disappearance, Piper decides to do some sleuthing on her own. Working with police Detective Mariano Cassano, Piper begins to look into her neighbors, their servants, and even her own family in order to find out the truth. What she discovers is everyone is harboring secrets, even Detective Cassano. Will Piper be able to solve the crime or have her actions placed her own life in peril? THOUGHTS: Readers will quickly find themselves caught up in this engaging whodunit set in the evocative atmosphere of Prohibition Chicago. Piper must face down numerous misdirections as she pursues the reasons for Lydia’s disappearance–keeping her (and the reader) guessing. A touch of romance enters the storyline with the appearance of the smart and talented Detective Cassano. Hand this one to fans of history and mystery.
Historical Mystery (1920s)       Elizabeth Henry, Lampeter-Strasburg School District 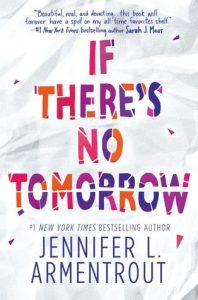 One decision, one split second choice changes Lena’s life forever. Before she was carefree. She was looking forward to volleyball season, applying to college, and enjoying her senior year. Now, Lena hides from everyone, herself included, and she can’t forgive herself for what happened. Unable to move on, Lena withdraws from everyone who cares about her – from everyone trying to help. THOUGHTS: Readers will be haunted by Lena’s isolation, but they will root for her as she tries to find herself in her new reality. It is difficult to describe too much without giving the story away, but this is a book every teen should read. It covers so many weighty issues and insecurities that many teens manage and does so beautifully as the narrator struggles to accept her choices. This book will stay with readers long after they read it and will (hopefully) make them think twice before making the same choice as Lena. 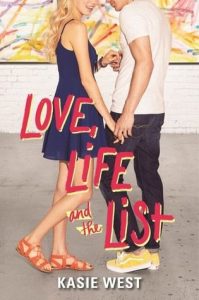 This story, while at times predictable, does offer an interesting perspective into the life of one teenager. Though two of her best friends are traveling or working over the summer, Abby is staying in her hometown with her best friend (and secret crush) Cooper. An aspiring painter, she is devastated when the curator at the museum where she works rejects her pieces, stating that they “have no heart.” Abby, taking the advice of her mom and grandfather, comes up with a list of experiences that she hopes will enhance and enliven her art. Her list includes, for example: face a fear, fall in love, and learn a stranger’s story. Abby’s interactions with Cooper prevail throughout the novel (and can be annoying at times), but the self-awareness that she develops as a result of the list is inspirational. Abby also must deal with her mother’s debilitating anxiety and a father who is stationed abroad. THOUGHTS: While not my top pick for YA novels, this title does encourage teens to think about their lives, and how they can go beyond their everyday existence to discover new parts of the world.