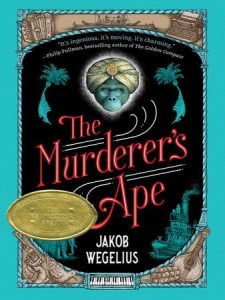 This beautifully illustrated mystery is the English translation of a Swedish novel published in 2014.  The book’s heroine, Sally Jones, is an anthropomorphic gorilla who can read, write, and understand language but cannot speak.  She is single-mindedly determined to prove that her best friend, Chief Koskela, a ship’s captain, is innocent of the murder he has been convicted of.  Her quest to free him takes her on a wild adventure from Portugal through India, where she struggles not only to follow a convoluted trail of evidence but for her own safety.  THOUGHTS:  Sally Jones is an unforgettable animal heroine extraordinaire who has more humanity than most humans, and yet remains a gorilla to her core.  This fun romp blends mystery, animal fantasy, and adventure, and is highly recommended for middle school libraries. 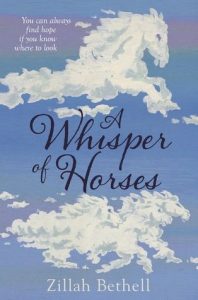 Serendipity lives in the walled city of Lahn Dahn, which clever readers will recognize as a futuristic, dystopian version of London.  She is a member of the lowest of three castes, and her most treasured possession is a map which shows a route outside the city to a place where horses–which are believed to be extinct–still thrive.  Serendipity dreams of finding the horses but despairs of finding a way outside the city until she meets Tab, an orphan who knows all about eluding the law. Together, Serendipity and Tab forge a tenuous alliance when they discover that each has resources the other can use to achieve their separate goals. THOUGHTS:  Excellent writing, an unusual storyline, and themes of friendship and loyalty that are developed in nuanced and thought-provoking ways make this book more than a run-of-the-mill dystopian novel.  One thing to note is that Bethell plays with language, imagining how words might evolve in a dystopian future (“amazering” instead of “amazing,” etc.); some readers will enjoy this, while others may find it frustrating or distracting.  Recommended for middle school libraries.