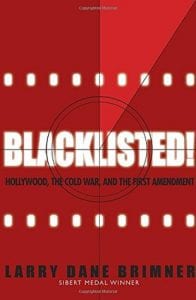 In Blacklisted!, Larry Brimner recounts the story of the 1947 House Un-American Activities Committee (HUAC) investigation of the film industry and the subsequent blacklisting of 10 Hollywood figures. As the Cold War intensified between the United States and communist Russia, many began to fear that Communists had infiltrated various parts of American society. The goal of the House Un-American Activities Committee was to investigate and root out these potential Communist threats. Their focus soon turned to to Hollywood, and actors, directors, producers, and screenwriters found themselves subpoenaed to face accusations that they were Communists. Ultimately, 10 Hollywood figures who were called before the committee refused answer questions, citing the protections afforded them by them by the Constitution (namely freedom of assembly and freedom of speech). Held in contempt of Congress, the men were sentenced to time in prison and were denied employment by Hollywood studios. In order to make ends meet, some were forced to work under pseudonyms for less pay, others moved out of the country or left the film industry altogether. This thoroughly researched work incorporates testimony and accounts from the HUAC hearings as well as numerous photos and documents.

THOUGHTS: An excellent examination of an event in American history that offers many parallels to current debates about civil liberties and the role of the government in investigating perceived threats. 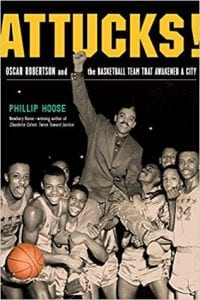 In 1955 and 1956 the Crispus Attucks Tigers boys basketball team from Indianapolis won the Indiana state high school basketball championship. But their story is more than one of athletic achievement. It is a story about the African American experience, the Great Migration, racism, poverty, community, and more. Since the founding of the segregated all-black Crispus Attucks High School in 1927, players had faced numerous obstacles including inferior basketball facilities, limited funding, finding schools willing to play them, biased referees, hostile crowds, and more. By the mid-1950’s, under the leadership of innovative coach Ray Crowe, and with the play of talented players such as future NBA Hall of Famer Oscar Robertson, the team had developed into an Indiana powerhouse. Attucks explores the journey of the team and it’s players, incorporating accounts of games that will keep readers on the edge of their seat. The text is supplemented by numerous photos, newspaper clippings, and supplementary back matter material.

THOUGHTS: This terrific title will appeal to sports fans or any reader looking for an engaging non-fiction read. Author Phillip Hoose does a great job of intertwining historical information with edge of your seat basketball action. If you are in a secondary library, this title deserves a spot on your shelves. 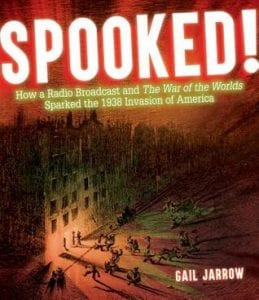 On the evening of October 30, 1938, Orson Welles and the members of the Mercury Theatre group took their place in front of the microphones for their weekly nationwide radio program. On the schedule: a dramatic adaptation of H.G. Wells’s The War of the Worlds, a story recounting the invasion of Earth by Martians. Little did the actors know that their broadcast would strike panic and fear in some of their listeners. In an effort to update the story and engage the audience, the decision had been made to change the setting of the story to contemporary America and to incorporate news bulletins and eyewitness interviews as storytelling techniques. In addition, names of real places and political leaders were used. The effect was realistic–too realistic for some listeners, who mistakenly believed the dramatic play was a real news broadcast about actual events. The subsequent outcry made Orson Welles a nationwide celebrity and also led to a debate about “fake news” and the role and responsibilities of broadcast media. The text is supplemented by numerous photos, illustrations, a timeline, and numerous recommended websites where readers can listen to the broadcast and learn more about the event.

THOUGHTS: This timely exploration of a unique historical events is a worthwhile addition to library shelves. Readers will find themselves caught up in the retelling of the broadcast and the reactions of everyday citizens to the event. Highly recommended.