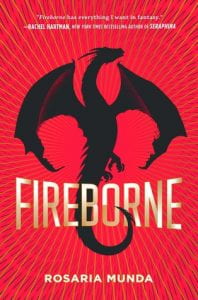 Ten years ago in Callipolis, a land of fire-breathing dragons, Atreus led a revolution, a massacre that took the lives of all of the members of the dragonborn families in power… or did it?

Unaware that members of the dragonborn families survived the massacre, Atreus establishes a new system of government, part of which is a tournament to determine the governing members of the new aerial guard and their leader, the firstrider. Prior to the revolution, one had to be of the dragonborn to compete for such a powerful title. Now, Annie, one of those competing for the role of Firstrider, is the epitome of the motivation for the revolution. A member of the lowborn class, her family was killed by the previous regime. In the old system, she would have been doomed to remain a lowborn for life. But thanks to the new, seemingly fairer system and Lee, another orphan who befriended and protected her in the orphanage, Annie has been able to climb to the top. They have been training with their dragons for this opportunity for years. Ironically, Lee is also competing for the role of firstrider. Even more ironic is the truth about Lee’s family history. Told in alternating points of view between Annie and Lee, the story of the Firstrider Tournaments and the secrets these characters must harbor is only the beginning of this exciting fantasy tale as war threatens Callipolis.

THOUGHTS: Equal parts action, politics, fantasy, and love, this novel has a little something for everyone. Hard-core fantasy fans will enjoy the dragons but may find themselves craving even more of Munda’s great world-building (I personally found myself craving a map at times). Munda crafts a complex political conflict that prompts readers to ponder heavy themes like loyalty, abuse of power, propaganda and censorship, and the cost war. Readers who crave a love story will not be disappointed, but those who dislike when a love story overtakes the plot will be satisfied too as the subtle romance in this novel takes a backseat to politics. A solid addition for fans of speculative fiction, and might make for a cool enrichment read in a social studies or philosophy class as Munda explains in her author’s note how Plato’s Republic inspired Fireborne. 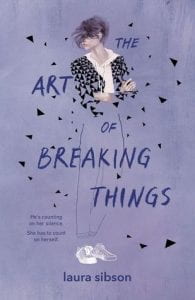 Skye Murray’s primary focus during her senior year is getting into the art school of her dreams and out of her hometown. Until she can physically escape the ghosts of her past by going away to college, she escapes through her art and some poor choices including using drugs and alcohol and engaging in physical relationships with boys that are just that – physical and nothing else. She feels that she is doing a good enough job being tough and coping until the “ghost” – Dan, her mother’s ex-boyfriend who abused her as a child – returns to their lives and reunites with her mother. Skye feels like she needs to reconsider her choices, especially when history threatens to repeat itself with Dan and Skye’s younger sister Emma, but she feels like no one will listen to her or believe her. In addition to dealing with Dan and her past, Skye also must figure out where she stands with Ben. For the last two years they have been drinking and getting high together, sharing their art and Ben’s band’s songs. Her once uncomplicated feelings for her best boy friend are starting to change, but she’s unsure she can handle a serious relationship, or if Ben even wants one because of her reputation. To avoid breaking every meaningful relationship she has, Skye must figure out how to break some other things… her habits, the truth, and a whole lot of plates.

THOUGHTS: I would not recommend this novel to sensitive readers as it contains a lot of mature language, references to drugs and alcohol, and descriptive sexual scenes in both abusive and consensual situations. However, for those readers who can handle it, Sibson’s novel is a powerful one worth reading. A story of family, friendship, love, and overcoming adversity, Sibson also conveys the power that art has to give us a voice when we feel unheard. 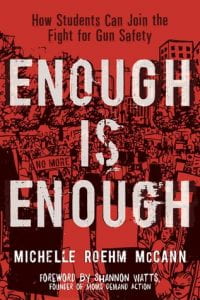 Written as a call-to-action for teen readers, Enough is Enough is penned by an active member of Moms Demand Action and Everytown for Gun Safety. As an adult with activism experience, McCann’s purpose is to prove to teenagers that they too CAN make a difference in the fight to change gun laws, despite hesitating because of their age and abilities. Part One of the book is chock-full of statistics, because, as McCann explains in her introduction, “If you’re going to argue with politicians, other adults, and your peers about why we need gun safety in this country, you will have to understand the issue pretty deeply.” Pages and pages of infographics and narration inform readers on the facts about gun violence and gun ownership in this country and compares America to other countries around the world. Part Two provides a history of gun ownership and laws in America including a thorough explanation of the Second Amendment and the National Rifle Association (NRA). Parts Three and Four provide possible solutions to the problem and practical, specific ways for teens to take action. Each chapter profiles young activists such as Parkland High School survivors who started the #NeverAgain campaign and Julia Spoor, co-founder of Students Demand Action, a group affiliated with Moms Demand Action. McCann does not alienate gun owners though, and at no point does she suggest eliminating guns entirely. She even profiles gun owners and addresses them directly, stressing repeatedly that this issue is not a political issue but a human issue that can be solved by agreeing on some common ground and working together.

THOUGHTS: This is an excellent addition to any middle school or high school nonfiction collection. The writing is straightforward and full of documented research, and there are a variety of thorough appendices at the back of the book including lists of additional resources both nonfiction and fiction, websites and social media for young activists and activist groups, and more. I would add one new fiction book to her list of additional resources: Every Moment After by Joseph Moldover, a book I reviewed last year that features survivors of an elementary school shooting as they prepare to graduate from high school. Enough is Enough would pair well with this book in an ELA curriculum. The writing style is relatable to teens, too. Perfect example: my favorite chapter, which is titled “The Second Amendment: WTF Is That All about?” 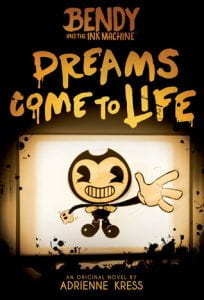 Bendy and the Ink Machine: Dreams Come to Life transports readers into the world of Bendy and the Ink Machine, the popular video game. This imaginative horror novel takes place inside Joey Drew Studios in New York circa 1946. Buddy has taken a dream job working as a gopher and future animator for the studio (that is if his boss ever lets him draw). Stepping up in the world means everything for Buddy, especially now that his elderly grandfather has come to live in his mother’s already overcrowded apartment, and they need the extra cash. All seems well until Buddy encounters Sammy, the strange musical director, covered in ink. Slowly Buddy begins to notice that odd things are happening around Joey Drew Studios. People and ink go missing, the latter slipping right off the page, loud thumps in the night, and rumors of a machine that no one has seen. By the time Buddy can figure out what has happened, will it be too late to save the studio?

THOUGHTS: Bendy and the Ink Machine: Dreams Come to Life will appeal to fans of the video game, if you’re looking for media tie-ins to add to your collection this book will fit nicely. 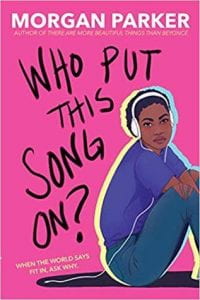 Morgan is just trying to figure it all out, and it’s hard. Trying to fit in when you clearly stand out is hard. Getting out of bed is hard. Morgan’s in therapy for her depression but the world just seems like one cruel joke. Her family doesn’t understand her, the world doesn’t get her fashion sense, and her friends know very little about what she’s going through. The only person who seems to get her is David, her new hopefully-more-than-a-friend from art class. Morgan’s world continues to expand and grow, and she struggles to find her place in it. As she and her friends, Meg and James, spend more time together, they begin to realize that they all have secrets and maybe, just maybe, life might be a little easier if they can rely on one another.

THOUGHTS: This is a book that tackles a tough topic like depression in a funny way. Morgan relates to the world around her via song, and the playlist is truly entertaining.