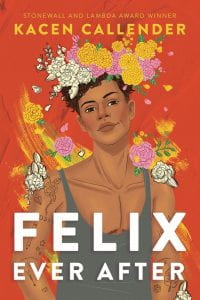 In the summer before his senior year of high school, it seems like everyone around Felix Love is falling in love… except him. Ironic, isn’t it?  Even though he desperately wants it, Felix has a complicated relationship with love. Felix’s mom left when he was a kid and hasn’t spoken to him since. When he was 12, he realized he is a guy, not female, the gender assigned to him at birth. Though his dad has helped him with his transition, he still does not call Felix by his name, simply referring to him as “kid.” Now, Felix continues to question his identity, a feeling he describes as a “niggling” that just isn’t quite right. While at a summer program at his New York City art school, someone displays stolen photos of Felix before his transition along with his deadname in the school gallery, something he has kept secret from his classmates and did not plan to reveal. In the aftermath of the gallery, an internet troll sends transphobic messages to his Instagram account. With all that is happening in his life, how can Felix Love fall in love when he doesn’t feel he deserves it? The quest to find the person who bullied Felix becomes more than just that; as Felix and his best friend Ezra seek out revenge, Felix forges unexpected friendships, finds himself in the middle of a love triangle, and learns more about himself. This raw, emotional YA contemporary explores a plethora of race and LGBTQ issues and teaches readers that age-old lesson that in order to fall in love, you first need to learn to love yourself.

THOUGHTS: Kacen Callender has written a primer on transgender youth and the issues they face in their second YA novel. Seeing the world through Felix’s eyes provides awareness and empathy. I would recommend this novel to any student of any background, whether they are looking for a protagonist they can relate to or they want to be a better ally. Sensitive readers may appreciate a warning that there is a lot of inappropriate language in the novel, but that shouldn’t detract from this powerful and important novel full of loveable, imperfect teen characters. Highly recommended for all collections.