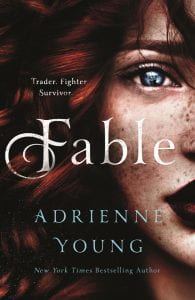 Four years ago, the day after a storm wrecked his ship and drowned his wife, Fable’s father, legendary sea-trader Saint, abandoned his 14-year-old daughter on the barbaric island of Jeval, leaving her to fend for herself on the brutal colony. Because she inherited her mother’s abilities as a gem sage, someone who can communicate with jewels, Fable survived as a dredger, mining gems from the sea, and making enough money to eventually purchase passage off the island, find Saint, and claim her place with his crew. But once she forces her way onto a trading ship, the Marigold, she wonders what secrets the small, young crew are keeping, even while being drawn in by their tight bond. When Saint refuses her appeal, sending her away with an unexpected inheritance, Fable has nowhere to turn but back to the Marigold and hope they will take her in. This lyrical novel, packed with adventure, quickly grabs the reader and doesn’t let go. Fable was raised on the sea, and she inherently loves being on board a ship. Young vividly conveys the routine of sailing a ship and the rhythm of the sea. Her world building is exquisite, and the port towns come alive, in their grandeur and squalor. Her characters are finely limned, and the hint of romance will satisfy. However, Fable has a flaw of always pushing the limit, and eventually she pays for a momentary slip, leaving readers hanging, awaiting the sequel.

THOUGHTS: This novel should find a wide audience, pleasing both action-adventure and romance fans.