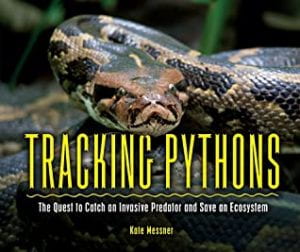 Once native only to Asia, Burmese pythons have invaded Florida!  Researchers speculate that animals kept as pets were released and quietly flourished undetected in the lush, protected swamps of Florida. Native animals such as alligators and mink, herons, deer, possums and more, are being affected by the insatiable appetite of the pythons. “People will ask me what pythons eat. The question should be, What don’t they eat?” says Bartoszek (44). Kate Messner follows researchers Ian Bartoszek and his colleagues from the Conservancy of Southwest Florida as they explain the scope of the problem and their efforts to control it. Scientists can respond to an invasive species in four ways: prevention, eradication, containment, or control. The burmese python population in Florida, estimated to be in the tens if not hundreds of thousands, is well beyond the first three responses, and even controlling the population is proving difficult.  Bartoszek and colleagues track the pythons using radio telemetry, capture them for analysis and transmitter implantation, and try to better control the population. “Another big goal is to advance snake science in general. We kind of owe it to the pythons. We have tremendous respect for this animal, so we try to gather as much scientific information as possible” (44).  Each chapter includes segments on “How to Catch a Python” (some surprising stories and methods) as Messner shares lessons learned, “python CSI,” and the wonder of the undetectable python, even when standing atop one! The book includes QR codes showing python releases and telemetry flights, and extensive back matter.

THOUGHTS: A compelling look at an amazing animal and its effects on an ecosystem, this book will engage readers with an interest in animals, the environment, and scientific careers.  A top example of narrative nonfiction.