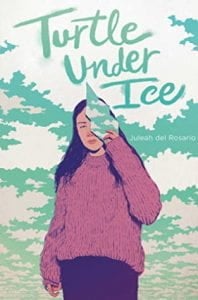 Teenage sisters Rowena and Ariana have drifted apart since the unexpected death of their mother several years ago. Rowena has thrown herself into soccer, becoming a respected top athlete on her team. Fearing change, Ariana has retreated into…nothing, and risks failing school. The sisters’ closeness has become a barrier as they both fear moving on, and as they both communicate less, and less honestly. Their father has remarried a woman they also love, and the family is incredibly hopeful about the arrival of their new half-sister. However, Maribel suffers a miscarriage, and the loss is too cruel for the sisters. “Our sister’s heart stopped beating/like our mother’s, unexpectedly/on a day that was otherwise/normal” (53).  Ariana vanishes, which leaves Rowena feeling angry and abandoned. This novel in verse is narrated by both sisters as they try to come to terms with this new grief, in addition to the unending grief of losing their mother. Slowly, both sisters discover that their grief has led them to close themselves off to others. Rowena tracks down Ariana at an art exhibit, where Ariana shows a painting “Turtle Under Ice” in memory of their mother. The relief comes very slowly as both girls see hope in Ariana’s art.

THOUGHTS: Del Rosario has a way with creating beautiful images with her words: “Our family…/is a frayed string of lights/that someone needs to fix/with electrical tape./It’s the electricity/that can’t get to us/because Mom’s bulb/has burned out,/so now the whole string is dark./But without the lights turned on/does anyone even notice/that we are broken?” (43-44). Ultimately, the insightful thoughts aren’t enough to save this novel from the monotonous weight of the crushing grief and depression, and the cover does little to draw in all but the most curious of readers. Recommended where novels in verse or multiple narrators are in heavy demand.