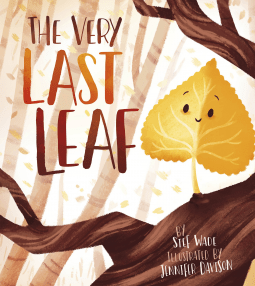 Lance the cottonwood leaf is used to being at the top of his class. From the time school began in the spring, he was the first to blossom, the best at learning wind resistance, and he excelled at photosynthesizing. But when autumn arrives, he’s hesitant about the final test: the one that will take him off his branch and onto the ground. Lance is afraid to fall. Lance wishes he could be like his friend Doug Fir who doesn’t have to fall and can instead stay on his branch all winter long. As the time to fall draws closer, Lance makes up excuses. But soon, he’s the last leaf on his tree. His mind races with everything that could happen to him when he falls. He might land in a gutter. Or, he could get stuck to a windshield. His teacher reassures him he’ll be okay, and he feels a little better after talking to someone. And, as he looks down from his tree, he starts to notice all the other things that can happen to leaves on the ground. He sees children playing in them and collecting them for craft projects. After seeing that his friends are safe and happy, Lance decides to make the fall. With his teacher and friends cheering him on, he finally lets go.

THOUGHTS: This gentle text highlights social-emotional themes such as anxiety, perfectionism, and facing your fears in a lighthearted way. This is a perfect choice for fall morning meetings and should also be shared with guidance counselors. A final page includes nonfiction facts about deciduous leaves.