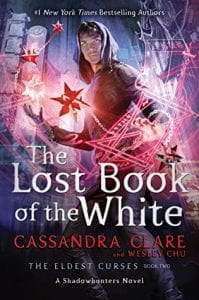 The Dark War has ended, and Alec Lightwood and Magnus Bane are trying to live a normal life with their adopted son, Max, in New York City, but when you’re a shadowhunter and warlock, attempting to raise a warlock child, life is never really normal. When old and new enemies show up at their apartment to steal The Book of the White and stab Magnus with a magical weapon, they must go to Shanghai to retrieve the book, find a cure to Magnus’s wound, and attempt to save a dear friend. However, they won’t be traveling alone. Jace Herondale, Clary Fairchild, Isabelle Lightwood, and Simon Lovelace accompany the couple to Shanghai where they meet Tian of the Shanghai institute and reconnect with Jem Carstairs. The group faces many challenges on their quest and eventually end up in the demon realm of Diyu. Alec and Magnus must trust each other, and the rest of their friends, if they plan to make it out alive, and all of the characters must grapple with tough choices and decide how much they’re willing to sacrifice to save the ones they love.

THOUGHTS:  The Lost Book of the White is the second book in The Eldest Curses, and while the first book focused mainly on Alec and Magnus’s relationship with each other, this book focuses on their new responsibilities as parents and the relationships they have with their friends and family. As a couple, Magnus and Alec have faced many hardships, and although this is a fantasy novel, their struggle for acceptance among their peers is a topic that many readers will also relate to. One of my favorite things about Clare is the diversity among her characters, and the way she strives to tell all of their stories with the help of fellow authors, like Chu. Fans of Clare’s The Infernal Devices and The Mortal Instruments will be delighted to read more about these beloved characters and what becomes of their lives after the events of The Dark War.