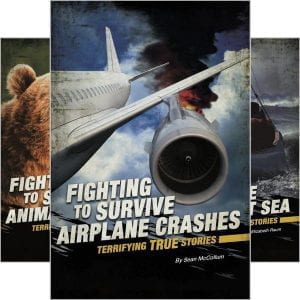 Readers looking to experience action-packed true stories will want to pick up the latest titles in Capstone’s Fighting to Survive series. Each volume features multiple stories (some from in the past; others from more recent history), of individuals and groups fighting to survive potentially life-threatening situations. This reviewer had the opportunity to read Fighting to Survive Being Lost at Sea. Chapters related tales of those experienced adventures on the ocean, from being aboard the Titanic, to surviving a U-Boat attack during WWII to a present day tale of a teen on a round-the-world sailing trip who encounters difficulties. Sidebars highlight points of interest and historical facts. The text is accompanied by photos, paintings and maps.

THOUGHTS: This engaging series is a worthy purchase for libraries serving upper elementary and middle school students. Each action-packed tale will have readers on the edge of their seats wondering how the individual/group will ultimately survive. These volumes would also pair nicely with fictional stories of survival.