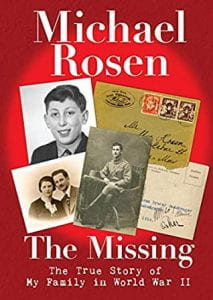 The Missing tells one man’s quest to find more information on his family that has been spread across multiple countries and just as many assumptions on what happened to some of the family members after the war. The short chapter book is written in chronological order, and most chapters end with a poem or part of a poem written by the author. Although a lot of specific information regarding World War II, especially from an English perspective, will be novel to most readers, most of it is specific to the author and his family. The abridged poems fit nicely with the topic covered in the previous chapter and are moving. In fact, the poetry could probably stand along as a more moving piece of literature, instead of including the granular details of uncovering the history of the Rosen family. The language is simplistic and the content is covered in a way that is not traumatic for young readers. Most helpful is the list of further reading at the end of the book, as well as some photos, including some letters.

THOUGHTS: In an already rather overpopulated genre, this title is recommended strictly for upper elementary or middle school libraries who feel a need to expand on their World War II collection.