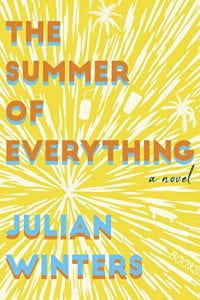 Wesley Hudson (named after Wesley Crusher from Star Trek) has just returned from spending the first part of his summer in Italy with his parents. His dad, Calvin, is a world-class chef and his mom, Savannah, is a best-selling novelist of Horrmance, which Wes describes as “books about werewolves fighting a blood feud while trying to find a date to the prom.” He’s not exactly a fan of her books. He is a fan of comic books though, and aside from his parents and his friends, one of the things he loves most in this world is Once Upon a Page, the bookstore where he works just a few steps away from the Santa Monica pier. Wes knows that he should enjoy this last summer before college just working at Once Upon a Page and hanging out with his friends, but he also knows he has a LOT going on. For starters, he must figure out what to study at UCLA. His brother, with whom he has a somewhat strained relationship, is getting married. He also needs to come up with a plan to finally do something about the crush he’s had on his best friend Nico since sophomore year. At first, Wes’s approach is just to sit back and assume it’ll all work out at some point because in his eyes, “Life owes [him] so hard for giving him nerdy genes, a pain-in-the-ass older brother, uncooperative curly hair, and the inability to skateboard.” But then Wes and his friends discover that Once Upon a Page is in trouble of being sold, and he can no longer just sit back and wait for things to happen.

THOUGHTS: Wes and his loveable, geeky friends come from various racial and ethnic backgrounds and sexual orientations making this a story where many readers can see themselves represented. It’s also full of nerdy comic book and 90’s music references. His relationship with Mrs. Rossi, the older owner of Once Upon a Page, is particularly endearing. Quite a bit of cursing, discussions about sex, and instances of underage drinking do make appearances in this book which may be worth warning sensitive readers. Ultimately though, The Summer of Everything is a look at a queer black young man’s coming of age as he starts to figure out his future and take on adult responsibilities.