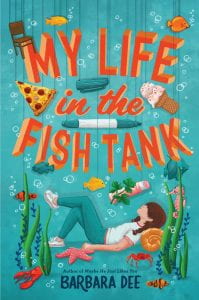 Zinny Manning’s family is known for being noisy and tightknit. She has a nurturing older brother, Gabriel; a moody sister in high school, Scarlett; and a younger, inquisitive brother, Aiden; and two longtime best friends, Kailani and Maisie. At the beginning of seventh grade, though, her world comes crashing down when Gabe steals and crashes his college roommate’s car. His impulsive behavior and hospitalization uncover Gabe’s bipolar disease. Now, a cloud hangs over the whole family as they strive to keep Gabe’s mental illness a secret from classmates, teachers, and neighbors. Zinny’s voice alternates from the present to the recent past. While she drifts further and further away from her concerned friends, Zinny recalls the fun times she has had with Gabe and dissects occasions when signs of his mental illness appeared. Zinny finds some solace in the predictable, controlled world of science. Her favorite teacher, Ms. Molina, has recommended her for a coveted spot as part of a middle school research team for the summer. Zinny gets respite from her friends’ constant questioning by helping Ms. Molina set up the crayfish tanks for the class’s animal unit. Zinny proves herself a resilient girl, helping her younger brother with his “how-to” project, shopping for groceries for the family, and sparking her beleaguered mother’s interest with an herb garden. When Zinny receives an invitation to the counselor’s Lunch Club, she at first throws it in the trash; but eventually, she starts to appreciate the opportunity to align with others who are also suffering from family concerns: divorce, stepfamilies, grief, or sick parents. Although it takes quite a while for Zinny to feel comfortable sharing, the group supports her and makes her feel she is not alone. At a therapy session at Gabe’s residential treatment center, Zinny confesses the anger she feels keeping the family secret. That small confession spurs a huge release that eases Gabe’s return home and allows the family to accept Gabe with a chronic illness just like cancer or diabetes. My Life in the Fish Tank is a story of a family in crisis and the shame and guilt they struggle with trying to deal with insurance, disruption, and worry. Author Barbara Dee has excelled in presenting an important topic with sensitivity and honesty. The Manning family seems to be white; the author integrates the diversity of other characters organically into the plot.

THOUGHTS: Though there are some fine books dealing with mental illness (Crazy by Han Nolan and All the Greys on Greene Street by Laura Tucker), My Life in the Fish Tank is a welcome addition. The dialogue captures the main character’s frame of mind well and depicts a likeable, relatable person. Zinny’s love of science and the crayfish experiment act as metaphors for her family situation Even though the plot flipped back and forth, the chapters were short and the writing fluent, making the story easy to follow. I could not put down this book.