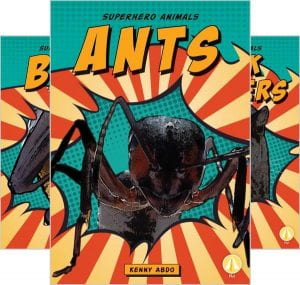 The Superhero Animals series explores the connection between animals and their comic/movie namesakes. Readers will learn about the history and characteristics of the comic superheroes as well as their namesakes in the animal kingdom. They will learn how animal characteristics were incorporated into the comic book characters. In Black Panthers, for example, readers learn how black panthers are intelligent creatures, known for their ability to stealthily track their prey. They are also known for their speedy running ability. The comic Black Panther (aka King T’Challa) is known for his wisdom, strength and speed, among other characteristics. Clearly the comic book creators drew inspiration from wild panthers in creating this superhero. Each title features photos of the animal in the wild as well as illustrations of the comic characters, including still photos from recent film adaptations of the comics. Back matter includes a glossary of terms and links to online resources.

THOUGHTS: This series is an unique combination of comic book history and animal facts. As such, it holds appeal for both fans of the many recent superhero comic film adaptations as well as animal fans. A worthwhile additional purchase.