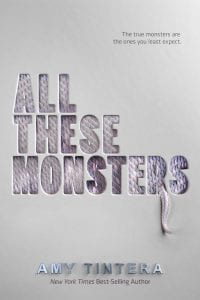 The world has been overtaken by vicious man-eating monsters that randomly pop up from underground. No one knows where or when they’ll attack next, all must be on guard, and deaths are staggering. Clara Pratt’s home life is still worse. Her abusive father is violent, angry, and manipulative, and anything can set him off in an instant. When Clara discovers her brother is about to leave, she knows she needs to too. After learning about Grayston St. John’s plan to send teams to fight the monsters (the scrabs as they’re called) overseas in Europe where America has refused to send help, Clara knows that’s her way out. Only if she can make the team and leave the country. But all is not as it seems in the world of the scrabs, and to face it she will have to fight her inner demons.

THOUGHTS: An action-packed novel, All These Monsters has earned a spot on my shelf right between The Hunger Games and The Maze Runner.