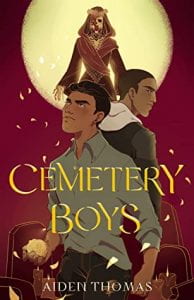 In the heart of LA lives a cemetery where the dead roam long after they’re gone. They’re welcome to stay as long as they stay themselves, but stay too long and a ghost risks turning maligno. Protected by the brujx, a line of guardians who roam the cemetery to keep the peace, the cemetery is home to the newly dead and those not quite ready to let go. Once they are ready, the brujos are there to release them into the afterlife. Yadriel comes from a long line of brujx and wants nothing more than to become one. However, even after coming out as trans, his family still tries to push him to be a bruja, a healer, and refuses to let him try to take the test meant for the men. When Yadriel takes matters into his own hands he ends up with a companion he didn’t expect, the ghost of a classmate who rarely attends school. If Yadriel can release him then he will prove himself as a real brujo. Julian, however, isn’t going to give up so easily.

THOUGHTS: A powerful story of Latinx heritage and the strength it takes to break with tradition and find your own place in the world. While not the same premise, readers of They Both Die At The End will love Cemetery Boys.