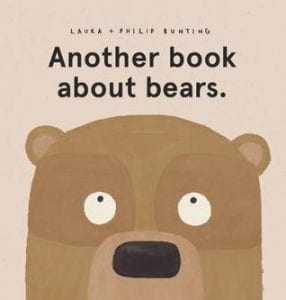 Have you ever thought about how many books feature bears in starring roles? Well, the bears are sick and tired of doing all the work! Just as this story is getting started, the leading bear rebels, speaking directly to the reader, and recounting all of his unappealing characteristics. Aside from being greedy and grumpy, he reminds readers bears are also lazy, a bit ferocious, and, frankly, exhausted! The bear quits the story, agreeing to come back only if he can’t find a better animal to star in the story. He grabs his trusty phone, calling up animal after animal, but no one is quite right. The elephant is too big, the crow too noisy, the crab too pinchy, and the peacock too fancy. Eventually, the bear and the reader make a deal, and students will laugh out loud at the final page’s compromise. Large, graphic illustrations brim with personality and perfectly match the text’s sly humor.

THOUGHTS: Since this story is set up as a conversation between a bear and the reader, it could be used as a mentor text for teaching voice during writing workshops. It might also be fun to challenge students to brainstorm all the books they can think of featuring bears as main characters and have them reimagine the stories with other animals playing the bear’s leading role.