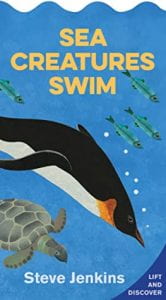 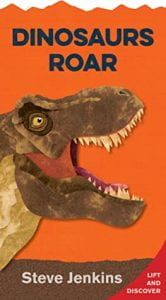 In these informational board books, Caldecott-Honor awardee Steve Jenkins introduces young readers to various dinosaurs and sea creatures. Each two-page spread includes beautiful, bright cut-paper illustrations with one sentence about the animals in the illustration.  Readers then open the flap to a three-tile full illustration and fact about the featured animal. In Dinosaurs Roar, he highlights lesser known dinosaurs like Titanosaurus and Spinosaurus. In Sea Creatures Swim, he looks at movement of the animals and why they do certain things like surface for air or jump from water. Each book also features a cut top associated with the subject; Dinosaurs Roar has a jagged edge like a dinosaur bit the book, and Sea Creatures Swim has a rolling top like waves in the ocean.

THOUGHTS:  These board books for toddlers and preschoolers are beautifully illustrated and the design encourages interaction with the book.