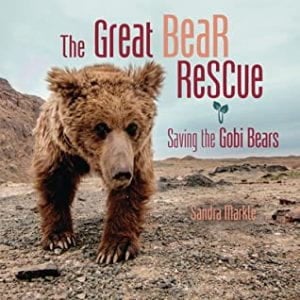 Gobi bears are the only species of bear to live entirely in a desert–the Gobi Desert, which means harsh, dry landscape in summer and bitter cold in winter. They eat mainly plants that they dig up with their claws, but the lack of availability of food and water has caused their numbers to dwindle to an estimated 31 (only 8 are female). What can conservationists do? Mongolians consider the Gobi bear to be a national treasure, and the Mongolian government has set aside large tracts of the desert as protected space for the bear, being sure to include areas with natural springs. They also established the Gobi Bear Project, which has led to tracking and accurate numbering of the remaining bears. Still, climate and humans threaten the bears.  Increasingly common droughts, as well as illegal gold mining of the desert (including protected areas) hurts the species’ chances of survival. But researchers are encouraged that the government is protecting the species, the Mongolian people are supportive, the tracked bears appear healthy, and the number of bears has increased slightly (from 22 to 31). Markle presents information about the bear and conservation efforts in a readable manner, made more accessible by numerous photos of the bears, the desert, and the people who would help or harm the future of the bears.

THOUGHTS: This book is a top example of nonfiction for young people, complete with timeline, glossary, source notes, further research, index, and note from the author. Markle has published 12 titles in the series “Sandra Markle’s Science Discoveries,” most recently The Great Penguin Rescue (2018), The Great Rhino Rescue (2019), and Follow Those Zebras (2020). Each title is expertly researched and presented for upper elementary and middle school students.