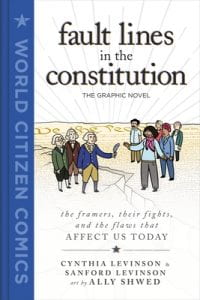 This graphic novel, which is an adaptation of a nonfiction book written in 2017 and part of the World Citizen Comics book series, tells the story of the United States’ Constitution, from its drafting and ratification through its many amendments over the last two centuries and right up to and including part of Donald Trump’s presidency. In a sort of dual timeline, the story goes back and forth between the framers making decisions about the Constitution and various points in American history where those decisions had problematic consequences. From the argument of balance of power between federal and state government in the infancy of the nation to the problems with the Patriot Act after the September 11 attacks, the back and forth plot clearly demonstrates how these men couldn’t possibly have predicted and accounted for occurrences 200-plus years in the future when they wrote this monumental document. This includes a particularly timely discussion of habeus corpus in 1787 that the book’s creators then tie to the Ebola crisis in 2014, which obviously strikes a chord with readers in 2020 dealing with the COVID-19 pandemic. After telling the story of the Constitution’s history, the creators grade the document in several areas from “providing for the common defense” to “establishing justice” and give it an overall report card; the results are unsettling.

THOUGHTS: Take out the cartoons, and this book reads exactly like a history textbook. It is chock FULL of information, and it forces readers to ask some very serious questions. At times, though, readers may forget how serious the content is because of the fun simplicity of the cartoonish forefathers speaking in common 21st century vernacular. A highly recommended read for everyone, but reluctant readers in a Social Studies class will find this format extremely approachable. On a personal note, I read this book in the days following the insurrection at the US Capitol, and I am not exaggerating when I say that several lines of this book gave me chills – the opening, in particular, part of which reads, “It might be appealing to believe that, because the Constitution and our country have survived this long, they’ll always do so. But the framers were not so confident. Perhaps you shouldn’t be, either.”