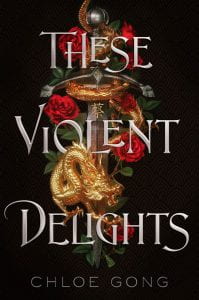 “These violent delights have violent ends.” It’s 1926, and the city of Shanghai is ruled by two gangs: The White Flowers and The Scarlet Gang. Juliette Cai has just returned to the city after spending four years in America, and she’s ready to forget her past and take on the role of heir to the Scarlets. When she is approached by Roma Montagov, the White Flower heir, he insists they work together to stop a madness plaguing their city and taking the lives of members of both gangs. She reluctantly agrees, although she was betrayed by Roma in the past. Together, as they prepare to hunt down a monster, they can’t ignore the passion that still exists between them, but if their alliance is discovered by either gang, the madness will be the least of their worries, and the blood feud between the two could turn deadly.

THOUGHTS: This novel brings some exciting new aspects to William Shakespeare’s tragedy Romeo and Juliet: 1920s flappers, the setting of Shanghai, monsters, and madness! The Scarlet Gang members are Chinese, The White Flowers are Russian, but the French and English are powerful presences in Shanghai as well, and this brings some diversity to the characters. You’ll be rooting for Roma and Juliette as they discover the secret behind the madness, and against all odds, find their way back to each other. This is perfect for readers who like action and historical fiction, as well as a bit of romance, and the ending will have them impatiently waiting for book two!

Juliette Cai seems to have it all as the eighteen-year-old heir to Shanghai’s revered Scarlet Gang. Juliette’s only problem seems to be her love/hate relationship with Roma Montagov, the heir of the rival gang the White Flowers. The Scarlet Gang and the White Flowers’ criminal networks operate above the law and are continually fighting, often killing each other on the spot when they accidentally cross into the other’s territory. However, a mysterious plague descends upon Shanghai, causing people from both sides to become mad and claw out their own throats. People begin whispering of a monster with glittering eyes, often seen in the water and controlling lice-like insects that burrow into people’s brains. In this retelling of Romeo and Juliet, both Juliette and Roma must put their feelings aside and work together to find the origin of this madness and stop it before Shanghai is destroyed.

THOUGHTS: With her beautiful descriptive language, author Chole Gong puts a riveting twist on a classic story in her debut novel, which promises to delight fans of the fantasy genre. Fans of fantasy sequels and trilogies will also appreciate that this story will continue in a yet-to-be-published sequel.