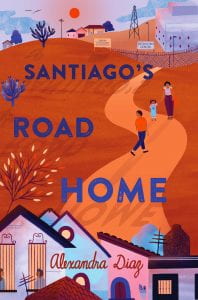 Once more author Alexandra Diaz raises our consciousness about the plight of Central American immigrants in our country at this critical time. As she did in The Only Road and Crossroads, Diaz gives a fact-based novel of Santiago Garcia Reyes’s escape from domestic abuse in Mexico through the desert to the detention centers of New Mexico. She does not pull any punches describing the sacrifices and suffering Santiago endures as he makes his way to America with newfound “family” Maria Dolores and her five-year-old daughter, Alegria. After being thrown out once again from a relative’s home where he worked as a free babysitter, Santiago refuses to return to his abusive, neglectful grandmother. Instead, he makes the acquaintance of the kind and generous Maria Dolores and her young daughter and convinces her to take him as they migrate to the United States where Maria Dolores’s sister owns a restaurant. For the first time since his Mami died when he was five-years-old, Santiago feels loved and cared for; and he reciprocates by being the protective big brother. By working in the cheap tavern at the crossroads, he discovers Dominquez, the best coyote to help them cross. Unfortunately, rival coyotes kill Dominquez, leaving the refugees abandoned just shy of the border. Diaz describes the arduous and dangerous journey through the desert, dodging border patrol officers and experiencing dehydration and hunger under a blistering sun. Their efforts end in hospitalization and detention. Again, Diaz intertwines facts and realistic representation about the conditions children suffer in the detention centers, yet maintains both the negative and positive aspects. Some of the detention center guards are kind; some are arrogant brutes. Minor characters like an interested teacher and volunteering lawyers give the story balance. The distress and maltreatment of Santiago as he lingers in detention as well as his brave struggle to belong to a loving family is heart wrenching and sure to instill empathy and compassion toward a timely situation. Includes a glossary of Spanish terms and extensive resources.

THOUGHTS: Diaz’s writing has a way of creating a fully developed character and a well-rounded setting that arouses true sympathy in readers. This book can provide a reference point to discussions of undocumented immigrants, refugees, migration to America as well as current events around asylum seekers and their reasons for immigration.