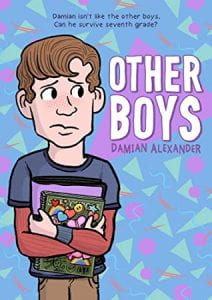 Damian always has felt different from other boys, preferring activities like playing with dolls, reading fairy tales, and sewing to GI Joes and superhero movies. He was teased and bullied relentlessly for being “gay” and a “homo” long before he knew what those words meant. Although it’s not discussed in detail, the reader learns that Damian’s mother was murdered by his father when Damian was a small child. Now, he lives with his brother and grandmother in a small apartment. Tired of being the “dead mom” kid and a target for bullies, Damian stops talking on the first day of 7th grade, after moving to a new town and entering a new school. After months of silence and loneliness, Damian finally shares his feelings with a kind therapist, who helps normalize his crushes on boys. Friendly peers, including a couple of cute boys, begin to draw him out of his protective shell, lending a hopeful note to an often heartbreaking graphic memoir. Inspired by colorful cartoons, funky arcade decor, and VHS tape boxes, Damian Alexander’s artwork is both firmly rooted in his childhood era and as timeless as a child’s secret pain.

THOUGHTS: Other Boys is a heartfelt graphic memoir about the loss of a parent, coming out, bullying, and self-acceptance. It’s an excellent addition to shelves that already include options for slightly older readers, such as Hey, Kiddo by Jarrett J. Krosoczka and Brave Face by Shaun David Hutchinson.