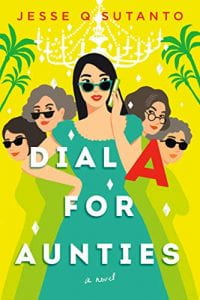 When mid-20s Meddelin “Meddie” Chan reluctantly agrees to go on a blind date arranged by her mother, she figures: what’s the worst that could happen? Well, she deploys her Taser to deter his overly aggressive advances, leading to a car accident and his (very unintentional!) death. Unsure of what to do next, she stuffs him in the trunk and turns to her mother and three aunties for help. The Chans sisters, who run a wedding business, have a huge event lined up the next day (at the hotel owned by Meddie’s freshly deceased date, one of many complications). The body goes into a jumbo cooler, the cooler goes aboard a ferry to the island wedding venue, and a comedy of errors – and a couple of crimes – ensues. The real hotel owner turns out to be Nathan, Meddie’s college boyfriend and true love, which raises the question: Who is in the cooler? Dial A for Aunties is packed with near-misses and comedic twists that will have readers alternately gasping with surprise and laughing out loud. Jesse Q. Sutanto depicts Meddie and Nathan’s sweet love story in a series of flashback chapters, adding appeal for teen readers. The Chan women stick together, despite a few sisterly squabbles, adding depth to a somewhat improbable storyline. Indonesian-Chinese wedding customs are incorporated as Meddie photographs the bridal preparations, tea ceremony, and other traditions throughout the highly eventful day.

THOUGHTS: With vibes of both Crazy Rich Asians and Weekend at Bernies, this big-hearted romantic comedy will leave readers anxious for the as-yet-untitled sequel.