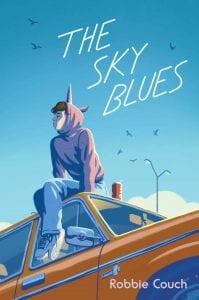 Sky Baker is openly gay in his small, conservative northern Michigan hometown, but he still works hard to not be openly gay. He attempts to keep things toned down, even consciously trying to walk straighter (pun intended). His devoutly Christian mother kicked him out of the house Christmas Eve, and now he’s living with the family of his best friend, Bree. The future for most of his friends is bleak; the majority of them do not have the money to pay for expensive colleges and, like Sky, are pinning their hopes on the local community college. So Sky decides to end his high school years with a bang: the biggest, gayest promposal ever seen. Sky isn’t even sure his crush, Ali, is gay. But for Sky, it’s go big or go home. When his plans get leaked on an all-school email account, he is mortified beyond belief. But to his surprise he finds friends, support, and romance where he never expected. This uplifting book emphasizes the value of good friends – “good friendships are worth fighting for.”  Most of the characters are white, but Sky’s best friend Marshall is one of the few Black students in the school and Ali is Iraqi-American. While Sky deals with prejudice because he is gay, it turns out he is less aware of the prejudices Marshall experiences. Another character is transgender. The setting and characters are extremely realistic and relatable, and readers will be delighted with the conclusion of the book.

THOUGHTS: A vibrant addition to any secondary realistic fiction collection. Many students will identify with Sky’s economically depressed hometown, where a few have much, but most face a challenging future.