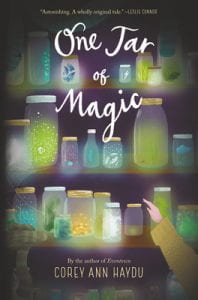 Rose Alice Anders isn’t just Rose. She is “Little Luck,” so nicknamed by her father, the luckiest man in Belling Bright, the most magical place in the world. Her father has the most knowledge of magic in this town where magic is revered and frequently used for everything from improving hair quality to crafting a rainbow (though her father cautions Rose and her brother Lyle that interfering with weather is too dangerous). All her life Rose has been striving to live up to her father’s belief that she will be the most magical in their family. Her status–and her father’s–brings ‘honor’ but also trouble into her friendships. So when the new year arrives in her twelfth year, Rose both longs for the day and dreads it for the pressure. Yes, she is magical, yes, her father has answers, but something doesn’t feel right, though she’d never admit it. The town’s New Year’s Day comes, and everyone is out to capture magic in jars of any color or size. Some magic sparkles, some changes colors, some seems to enchant just by being. Rose goes straight to Too Blue Lake, where she’s certain she, of all people, will manage to fill jar after jar after jar. But as the day goes on and her friends gather jars, and her brother tries to help her (should she be grateful or insulted?), Rose is fearful to come to the feast with just one jar of magic. She can feel her father’s anger. To appease his anger, her mother takes Rose and Lyle home, stopping at a store run by “not-meant-for-magic’ people. Though the store is nearby, Rose has never been there and never met these people. Her shame at failing to live up to her name and her heritage mixes with her curiosity in these people, who seem so….free. She wants to see Zelda–the daughter of the family–again, but knows her father (and the town) forbids it. What is going on in her family and in her town?  Where does Rose belong and how can she take a stand when she’s not sure of anything?

THOUGHTS: Haydu crafts a very real town full of questions, possibilities and dangers.  She presents the confusing family dynamics well, as Rose struggles to reconcile her hesitations and doubts with her father’s certainty, her mother’s acquiescence, her brother’s kindness, and the town’s solidarity. Who is she, if she’s not Little Luck?