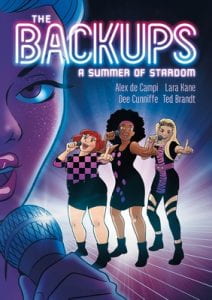 In this charming graphic novel, three rising seniors at the Brooklyn Performing Arts High School land the ultimate summer job: singing back-up on tour with pop superstar Nika Nitro. Jenni is a fierce vocalist, Lauren is a dedicated classical cellist, and Maggie is a tough-as-nails drummer. With their very different backgrounds and musical interests, the girls don’t exactly gel as a squad. But life on tour is tough when you’re twenty feet and a world away from fame, and they quickly learn to depend on each other for support and friendship. Add in an accidental beef with an underground punk band, a blossoming (but strictly forbidden) crush on Nika’s supporting act, and a secret that could end the star’s career, and you have all the backstage / onstage drama you need for summer!

THOUGHTS: The different body types represented on the cover of The Backups hint at the delightfully diverse story within, in which characters cope with anxiety, crushes, coming out, lip-syncing disasters, and so much more.