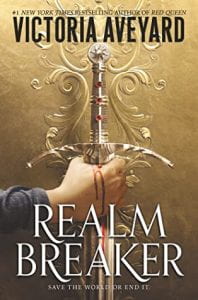 Aveyard returns with a lush new fantasy series that feels like a cross between King Arthur and Game of Thrones. A new player has come to the Ward, a man with the power to open Spindles, portals between realms. Spindles have not been opened for generations, not since the Immortals traveled into the Ward and found themselves stranded, unable to return to their home. But now Taristan has stolen the sword to create spindles, and begun releasing monsters and undead creatures into the world. Those knights who survived the initial battle between good and evil realize what Taristan is unleashing, yet few rulers care to believe them. The Immortal Domacridhan knows what it will take to stop Taristan – an individual with Corblood, and a Spindlesword – and he sets out to locate 17-year-old Corayne, an illegitimate daughter of the Cor lineage, who yearns for adventures her pirate mother refuses to grant her. The group gradually enlarges to seven unique characters, including a squire who lost his Lord at the first battle; a forger; a bounty hunter; a witch; and Sorasa, an assassin who steals the story. With no support from the monarchs of the Ward, the ragtag group proceeds to try to close the spindles before their world is set ablaze. This first book in the series has a great deal of scene setting to accomplish, and Aveyard evokes a fascinating world of exotic lands and characters of all ethnicities and skin tones. A detailed map on the endpapers assists readers in keeping track of the sprawling territory, and at times the proliferation of characters, locales, and realms can be overwhelming, but the story is gripping and delightfully satisfying. While Corayne seems to be set up as the main character, the story rotates between all the voices, and each character is a well-developed personality: Andry, the 17-year-old squire has nobility ingrained in him, but slowly develops the ruthlessness needed to survive their quest; Dom, the Immortal, does not quite understand mortals; and Sorasa, the female assassin, just might have a heart under her tough persona. There is no shortage of action, battles, monsters, daring escapes, and breathtaking betrayals.

THOUGHTS: Fantasy lovers should flock to this new series and be waiting on the edge of their seats for the sequel.

Corayne an-Amarat is the daughter of a pirate, but she hasn’t had any adventures of her own. When she discovers that she’s the last of an ancient line, her world is changed forever. Corayne begins a journey along with Domacridhan of Iona, an immortal sworn to protect her, the assassin Sorasa Sarn, squire Andry Trelland, the forger Charlon Armont, bounty hunter Sigil of the Temurijon, and a witch named Valtik. Together, this fellowship sets out to stop Erida of Galland, the queen who chose to ally with villainous Taristan of Old Cor from using spindle magic to tear a rip between worlds, and save the Allward realm from their destruction.

THOUGHTS: This book reminds me of Game of Thrones but for a YA audience. The story is told through the perspective of a large cast of characters. Some of the characters are good and set out to defend their world while others, hungry for power, make questionable decisions that will determine the course of the future. Within the fantastical world of Realm Breaker, readers will experience action, adventure, and ancient magic along with pirates, assassins, and monsters. This also would be a great book recommendation for readers who aren’t looking for a strong love story, and it’s perfect for any fan of the high fantasy genre.