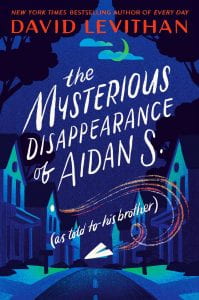 It has been six days since Lucas’s brother Aidan went missing, and of course, everyone is frantic. Police, search-and-rescue teams, friends, and family members are searching everywhere for him, not daring to consider the worst. On the sixth night, Lucas hears a noise above the bedroom he shares with his brother and goes up to the attic to investigate. He finds Aidan face down on the floor in front of a dresser as if he had fallen out of it. Disheveled and disoriented, Aidan lifts himself from the floor and looks inside the dresser, seemingly dismayed. After Lucas alerts his family to Aidan’s reappearance, everyone wants to know where he was for those six harrowing days. A fantastic world called “Aveinieu” is his reply. No one believes that Aidan actually went to a magical world that only exists through the dresser doors. But Lucas does believe him because he remembers something. He remembers that when his brother was lying on the floor of the attic, there was something in his hair: a blue leaf in the shape of a diamond, unlike anything Lucas had seen in this world.

THOUGHTS: Students will read this book to find out if Aveinieu really exists and end up discovering that the bond between brothers can be stronger than anything in the world (this world or any others that exist). At its surface, this book is a fantastical tale of getting lost in another world, but deep down, it is a heartwarming story about family. This is definitely a must-have book for upper elementary and middle grade libraries.

Aidan, twelve years old, has gone missing. Lucas awakes one morning to find the room he shares with his older brother Aidan, empty. The boys’ parents start a frantic search alongside members of the community to find Aidan that lasts for 6 days. By this time the local police are hoping for the best, but expecting the worst. But when Lucas hears a thump from the attic, everything changes. Aidan appears in the attic looking confused with a blue diamond leaf in his hair. When Lucas asks Aidan where he was, he replies, “Aveinieu.” Everyone is happy that Aidan has returned, but there are big questions about where Aidan was for those six days. Aidan attempts to tell his story, but the adults do not believe him at all. Lucas talks to Aidan at night and over the course of a few days learns about Aveinieu and gains Aidan’s trust. While Lucas accepts Aidan’s story, the town does not and the students at school turn against Aidan and start making fun of him. The brothers stick together and in the end Lucas (who narrates the story) says, “Like all honest stories, it lives within us.”

THOUGHTS: Leviathan’s first middle grade novel does not disappoint. The story will tug at your heart strings and has a Narnia-esque quality to it. Aveinieu is a magical place with green skies, blue trees, and strange creatures. The struggle Aidan faces in wanting to return to this magical place while not being believed by the adults is heartbreaking. This book was a quick read because I couldn’t wait to find out if Aidan would be allowed back in Aveinieu.