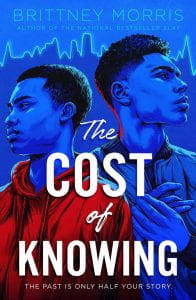 Despite trying his best to hold things together, sixteen year old Alex Rufus is struggling. Since the death of their parents, he and his little brother Isaiah have grown apart, barely interacting with each other in their Aunt Mackie’s house. Alex has his girlfriend Talia but constantly worries that he’ll do something wrong to ruin their relationship. At work Alex would prefer to remain in the back washing dishes while wearing rubber gloves than be out front scooping ice cream and interacting with customers. At the same time, Alex and Isaiah’s neighbor Mrs. Zaccari makes initially subtle and increasingly frustrating comments about neighborhood crime and what the Shiv concert coming to the area will mean for their safety. Alex is one touch from losing his carefully constructed exterior. Since the death of his parents, Alex gets a glimpse of the future when he touches anything. Usually something simple and easily dismissed, things become complicated when Alex visualizes an unreadable expression on Talia’s face – the sign of a breakup – and unbearable when he has a vision of his brother’s death. Burdened with the knowledge that he he can’t stop the inevitable, but determined to fix his relationship with Isaiah, Alex races to reconnect with his brother and learns that the two may not be as different as he thought.

THOUGHTS: Readers will root for Alex from the beginning as he works against “his curse.” Many readers will be able to suspend reality enough to believe this mostly realistic fantasy. Recommended for high school collections where compelling, character driven titles are in demand.