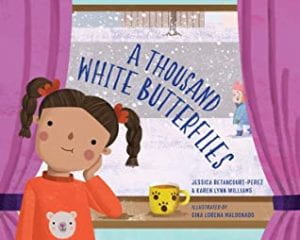 Isabella has just moved to the United States from Colombia. She’s about to begin school, but an unexpected blizzard cancels her first day. She feels trapped by all the unfamiliar snow, and she misses her friends and her Papa who is still in Colombia. While looking out the window, Isabella sees a girl slip and fall into the snow outside. She bundles into her puffy coat and boots and hurries outside to see if the girl is alright. The pair end up spending the afternoon making snow angels, snowballs, and a snowman. Despite the language barrier, they laugh and play and make the most out of their surprise meeting and unexpected day off from school. Two Author’s Notes describe how the co-authors met and the real-life inspiration behind this book. Additionally, a “More Info” section defines “immigrants” as people who leave their original country to live permanently in a new place. It also includes a brief history of immigration to the United States. Lastly, a glossary defines each Spanish word or phrase used in the story.

THOUGHTS: Hope, resilience, and friendship are central themes in this immigration story, as is the idea that children are able to make connections with each other despite language and cultural differences. These ideas will make good talking points during morning meetings or when welcoming a new student into a classroom. Share this title with guidance counselors and ESOL teachers.