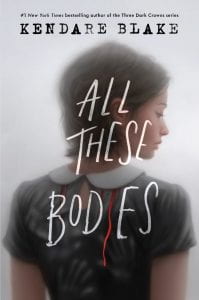 It is the summer of 1958 and many gruesome murders have been occurring all along the midwest of the United States. It seems that these murders have been traveling, moving throughout the midwest and heading towards Canada. Michael Jenson is relieved to find that the murders seemed to bypass his small town… until he realizes that the murderer did not. In fact, the entire Carlson Family is murdered. This time, however, someone has been left at the scene. A girl, completely covered in blood. Thought as a victim, until everyone realizes she isn’t covered in her own blood, but rather the Carlson Family blood. Not only is she covered in blood, but she refuses to tell anyone what happened… except for young Michael.

THOUGHTS: A gripping horror/murder/thriller novel. Once you start reading, you won’t be able to stop until you hear the full story of what is going on. This novel will make you question whether this girl is telling the truth or lying and whether we really know what goes bump in the night.