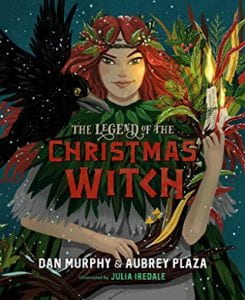 It’s been a while since a new holiday folklore book hit the shelves! Santa’s twin sister, Kristtōrn, was raised by a witch in the woods. Although it may sound familiar that her magic powers grew just as proficiently as her temper, the storyline leans into fear and persecution of the “other” that existed during the Salem witch trials and occurs in other fashions in the modern day.

THOUGHTS: This story is unusual and far from traditional, but makes space for another tale to be told about the Christmas season. The book is beautifully illustrated and appeals to natural aspects. The ending leaves a lot for the reader to interpret and would be a good project book for older readers.