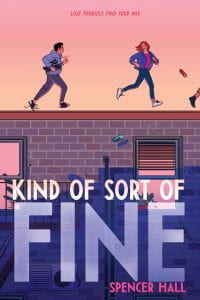 Senior Hayley Mills is a straight-A student in her advanced classes and a star athlete on the tennis team. Or at least she was. Last year she had a mental breakdown in front of her high school and, thanks to some onlookers, it became a viral video. Now, at the start of what is supposed to be the best year of her life, Hayley’s parents and teachers want her to make some changes to ensure the breakdown doesn’t happen again. As a result, she ends up in a TV Production class instead of one of her advanced placement courses. In TV Production, she meets Lewis Holbrook. A long-time member of the TV Production crew, Lewis is looking to be his best self in 12th grade. This means getting in better shape and finally drumming up the courage to ask out his crush. When Hayley and Lewis are paired up in class, they decide to make documentaries about the little known talents of their fellow classmates. Together, the two of them get to know their classmates’ identities more deeply than ever. What they didn’t expect, however, was to discover new things about themselves along the way.

THOUGHTS: Hall’s first novel is a humorous, coming-of-age story in which high school students (and those who have experienced high school) can relate. Told in alternating chapters between Hayley and Lewis, each point of view brings senior year anxiety into sharp focus but in different ways. This book would be a solid choice for high school libraries.