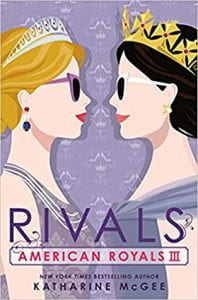 Returning from what would have been their honeymoon (had they gotten married), Beatrice and Teddy are back after spending a few blissful weeks in the Caribbean. Teddy hopes to define his role as king consort to give the unprecedented position meaning and purpose. Beatrice has a lot of work to do to prepare for the League of Kings conference. For the first time, Beatrice is hosting the conference as Queen of America, and she plans to bring her father’s climate accord to vote, despite the uphill battle she’ll face as a powerful woman. Princess Samantha went on the Royal tour at Beatrice’s request and convinced her best friend Nina to go along. In love for the first time, Sam is figuring out who she is and how to be the heir her family needs. And with the League of Kings taking place in Orange, Sam is looking forward to spending some time with Marshall. Meanwhile, Jeff filled as Regent (with Daphne by his side) in at the capital during his sisters’ absence. As the royals settle into their roles, friendships and old rivals are put to the test. No matter where the Washington family goes, drama seems to follow. Spoiler alert, the League of Kings conference will be no different.

THOUGHTS: Tackling some tough topics like gender roles, privilege, and racism, the characters take on more dimension in this title than the past two, and readers will find themselves rooting for each rival as they get to know them. They also desperately will hope for another title in this series!