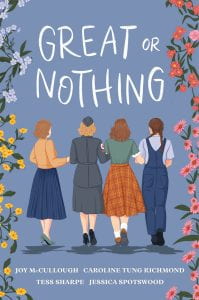 Louisa May Alcott’s four March sisters have entered the 20th century, circa 1943. Beth has died, and the family struggles to cope with the overwhelming sadness of this loss. Marmee distracts her grief with committees and charitable works; Father, next-door neighbor, Theodore Laurence, and teacher John Brooks go off to fight the war; and the three young women are split apart. Four talented authors take on the personas of the classic characters, and each chapter recounts that character’s experiences against the backdrop of World War II. Beth’s voice in verse reflects her omniscient view of each of her sisters. Meg decides to stay close to home, dedicated to teaching at her former high school, but is so lonely, she concedes to pal around with an insipid but wealthy former classmate which results in revelatory consequences. After rebuffing Laurie’s unexpected marriage proposal, Jo goes off to Hartford, Connecticut, to work in a munitions factory and live in a boarding house with other female workers and pursue her writing. When she meets Charlie–Charlotte–a war journalist, Jo starts to come to terms with her sexual identity. Under the pretense of studying art in Montreal, Amy instead takes on a false identity and ships off with the Red Cross to minister to the morale of soldiers with coffee and doughnuts in London, England. There, she encounters prejudice and discrimination foreign to her upbringing, as well as the promise of true love. This contemporary spin on the classic Little Women is an easy read with touches of romance, LBGTQ+, and slang from the forties. Grab yourself a cuppa, curl up in your favorite chair, and hunker down to meet these Little Women.

THOUGHTS: Though four authors take on each of the March sisters, the writing flows smoothly and the writing is fairly even. Beth’s perspective voiced by Joy McCullough was my least favorite.  Reading the prose, characters were more well developed and satisfying. Though the story begins with the March sisters going their separate ways, it ends with the promise of them reuniting. Suggest this novel to lovers of the classic, but those who have never read Little Women will still understand the closeknit March family and the dynamic among the sisters.