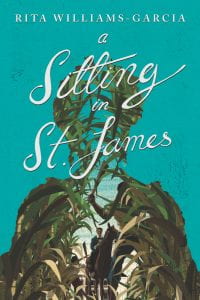 Madame Sylvie Bernardin de Maret Dacier Guilbert relishes her past in the French Court, but with the fall of the court, so too fell Madame Sylvie, forced to marry Bayard Guilbert and move first to Saint-Domingue and then to St. James Parrish, Louisiana. Now, over 60 years later, she still relishes in her connection to the dead French queen and the need to maintain her appearances throughout St. James. Thus, she rules Le Petit Cottage, the Guilbert plantation, as though nothing has changed since her husband’s death 30 years ago. But, it’s 1860, and the United States, and Louisiana, are changing. Mixed-races are thriving throughout Louisiana; plantations are being sold; Abraham Lincoln has been elected president, and yet, Madame Sylvie cannot let go of the past. When she learns that a descendant of the French court’s portrait artist, Le Brun, is in Louisiana, she forces her son Lucien to bring him to Le Petit Cottage for a sitting. Although out of style and unaffordable due to the debt Lucien has brought upon the plantation, Madame Sylvie insists on the sitting and the importance of it to the French and her future family’s legacy and memory. But, what legacy can she provide when everything is lost?

THOUGHTS: Told through the eyes of a white, plantation madame, A Sitting in St. James approaches the antebellum period through a new lens. Williams-Garcia still tells the story of slavery in the antebellum South, but not the strength in it; instead she looks at the downfall of the Guilbert plantation because of the resistance to change and an inane desire to have what doesn’t exist anymore from Bayard’s marriage to Sylvie to Sylvie’s desire still to be a part of the French Court even though it does not exist. Additionally, Williams-Garcia addresses the need for children and grandchildren to sustain a plantation throughout the novel through the deaths of Sylvie’s children, except for Lucien, and the homosexual relationship between her grandson, Byron, and Robinson Pearce. She also addresses gender inequality through the female characters of Eugenie, Jane, and Rosalie because they must find husbands to support them and the plantation. This is a welcomed addition to antebellum historical fiction and another fabulous novel by Rita Williams-Garcia; it does, though, include some descriptive and graphic sex scenes and rape of slaves.