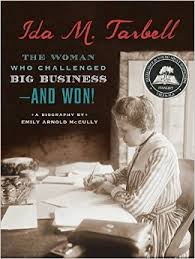 In a departure from her work as a well-known author and illustrator of children’s books, Emily Arnold McCully has written a solid YA biography about investigative reporter Ida M. Tarbell.  This book cover’s Tarbell’s life from beginning to end and provides a great deal of insight on a woman who was ahead of her time.

Ida M. Tarbell was born in 1857 in the village of Hatch Hollow (Erie County), Pennsylvania.  Ida’s father had a number of different jobs, but his work as an independent oil producer/refiner seemed to have the most impact on her.  Ida attended Allegheny College in Meadville, PA, and majored in biology.  The research skills Ida learned at Allegheny helped her to become an able reporter.  After teaching and travelling for a period of time, she was hired by McClure magazine and wrote multi-part features on famous figures, including oil baron John D. Rockefeller.  Ida’s dislike of Standard Oil, Rockefeller, and Rockefeller’s business practices (which had adversely effected her father’s business) led her to write a very thorough and critical piece- and led her to be christened one of the first “Muckrakers”,  journalists whose sole purpose was “dig up dirt” on other people.

The most intriguing aspect of Tarbell’s personality was that she was difficult to classify.  Although she was very concerned with fair business practices, she supported Taylorism (the idea that a manufacturing job should be broken up into small repetitive steps), which was anathema to labor unions. She was also very opposed to women’s suffrage and believed that the most important thing a woman could do was be a mother and wife.  It seems that she did not apply these rules to herself; she circulated freely in the male world of reporting and never married.

Although this was a detailed account of Ida Tarbell’s life, it might have been a more appealing work if muckraking or women’s suffrage were given more coverage or put into a contemporary context.  This is a work that will be difficult for all but your most persistent readers to complete, although it will be very useful for student researchers.  Emily Arnold McCully’s discussion of the oil industry in Pennsylvania helps this book to be an essential element of any State library collection. 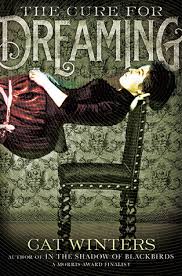 Set in Portland, Oregon, in 1900, The Cure for Dreaming has the promise of being a great historical YA novel.  When seventeen year-old Olivia Mead is thrust on stage as an audience volunteer at a Halloween performance by the mysterious hypnotist Henri Reverie, her life changes more than she bargains for.  Her father hires M. Reverie to hypnotize Olivia to keep her from becoming a wild woman who argues with men and hopes to vote.  Yet the opposite happens, and Olivia finds that she can see the world as it truly is…full of vampires and monsters.  Perhaps not entirely historically accurate, it’s an easy read that doesn’t take a lot of thought.  I would recommend this to a student who is interested in historical fiction and fantasy.